Ours to Reason Why 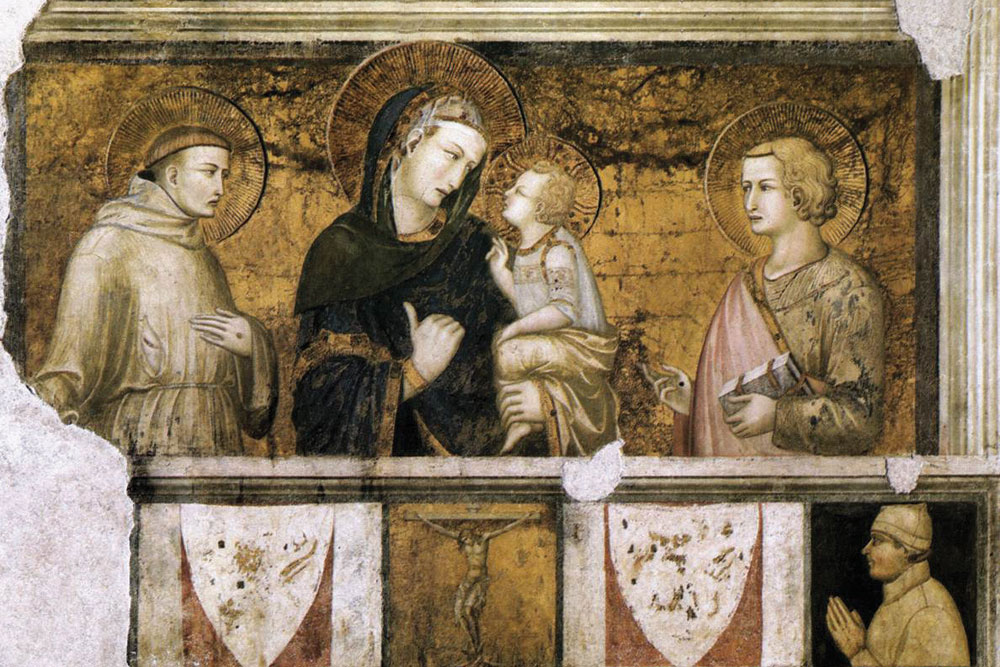 Madonna with St Francis and St John the evangelist by Pietro Lorenzetti, C 1320, at Basilica of San Francesco d’Assisi


“ALEXA, TELL ME a joke,” my five-year-old nephew leans into the speaker and asks. Alexa replies, “What did Earth tell the other planets?” A moment’s pause. Alexa continues, “You really need to get a life.” My nephew and his seven-year-old brother burst into giggles. “Alexa,” my nephew continues, “are you smart?” She replies, “I try my best,” which sends the children into gap-toothed smiles. To be around kids is to be at the receiving end of a tennis-ball machine. They fire out question, after question, after question. You need to be fast on the uptake, or the questions can clonk you on the forehead with their speed and accuracy.

For children, the world is all new, everything and everyone awaits their exploration. The smallest of incidents can send them on forensic trajectories. They make sense of the world and their place in it by asking questions of those around them. For example, the five-year-old once asked his mother, during bedtime, “Am I adorable or useful?” Questions aren’t merely questions in themselves, they are building blocks which when stacked together tell them their identity, who they are and what we all are.

A painting that comes to my mind where a mother and child are engaged in the act of question and answers is by Italian artist Pietro Laurati (1280-1348). It can be found in the fresco decoration of the lower church of Basilica of San Francesco d’Assisi. Laurati’s painting shows Madonna with St Francis and St John the Evangelist. Madonna cradles an infant Christ in one arm and looks down at him as if asking who should be the patron saint. He looks up at her with a glance that is as questioning as it is pointed. With her thumb she points to the left where St Francis stands bearing the stigmata on his palm. St Francis seems to be asking, “Me?” in response to baby Jesus’ suggestion. Mary’s thumb gesture seems unusually casual. But through it the viewer also feels she is privy to an exchange between a mother and child. This four-person fresco encapsulates the art and spirit of questioning; it dissolves boundaries and can blur hierarchies. Here the mother seeks out her child’s advice, as do those around her.

In the book You’re Not Listening: What You’re Missing and Why It Matters (2020), journalist and author Kate Murphy writes about the importance of asking questions. Chemistry Nobel laureate Eric Betzig tells her, “Everyone is born a scientist. It’s just unfortunate that with a lot of people, it gets beat out of them. I’ve been lucky to be able to maintain that kid-like curiosity and enthusiasm for experimenting and learning.”

As Betzig mentions this “kid-like curiosity” is all too often squeezed out of adults. But to be curious about the world, to ask questions of it is quite simply to care about the world. It makes perfect sense that the root word of ‘curiosity’ is ‘cure’ from the 14th century Latin word cura. The word then evolved to mean ‘care’ or ‘heed’, with many figurative extensions over time such as ‘study; administration; office of a parish priest’ and ‘means of healing’. The word curiosity carries within it not only the desire to know, but also implies tending, listening, studying and most importantly healing. To be curious about others is to cure oneself of bias and bigotry, it is to heal fault lines.

Questions drive our world. They form the bedrock for scientific discoveries and aesthetic pursuits. Scientific questions build on incremental knowledge. A ‘good scientific question’ is one which can be investigated empirically, a ‘bad’ question is one around which no experiment can be designed. Of course, the scientific question that has reached the level of legend today is the one often attributed to Newton: ‘Why did the apple fall on my head?’ While science distinguishes between ‘good’ and ‘bad’ questions, in the humanities, one is constantly reminded that there are no ‘bad’ questions.


Mary’s thumb gesture seems unusually casual. But through it the viewer also feels she is privy to an exchange between a mother and child. This fresco encapsulates the art and spirit of questioning; it dissolves boundaries and can blur hierarchies

I once had a journalism professor called Kevin Coyne. His weekly seminars would start with a simple exercise: each student had to bring a question to class. It needed to be an open-ended question, something which did not have an obvious ‘yes’ or ‘no’ answer, and it needed to be a question whose answer was not immediately Googleable. As the only foreigner in that class of around 10 scholars, I often managed to have the ‘Ahh’ questions. Not for reasons of intellect or sagacity. But merely for having the advantage of new eyes, for being an outsider in an ‘alien’ environment. These were questions that would puzzle any newbie to the US, for example, why didn’t plug points have switches; or how did ice-cream carts decide on the song that they’d play, or why did a ‘tall’ cappuccino actually mean a ‘medium’ cappuccino? When everything is new-like, the questions become plentiful. Questions dry up when routine and dailyness quench curiosity.

In mythology, questions can be used to distinguish divinities from others. Bibek Debroy is a preeminent scholar and writer on the epics. In the Open magazine (July 17th, 2020), he has written about the yaksha prashna, the story of a question-and-answer dialogue between Yudhishthira and a yaksha in the Mahabharata. Yudhishthira must answer the questions in order to bring his brothers back to life. The questions traverse a spectrum of dharma and duty. For example, the yaksha asked, ‘What is the supreme dharma in this world? What dharma always leads to fruits? What does not grieve when it is controlled? What alliance never breaks?’ And Yudhishthira replied, ‘Non-violence is supreme dharma. The dharma of the three [Vedas] always leads to fruits. The mind does not grieve when it is controlled. An alliance with the righteous never breaks.’

Alfred, Lord Tennyson’s 1854 poem, ‘The Charge of the Light Brigade’, written during the Crimean War, tells us of the soldier’s duty.

‘Forward, the Light Brigade!’
Was there a man dismayed?
Not though the soldier knew
Someone had blundered.
Theirs not to make reply,
Theirs not to reason why,
Theirs but to do and die.
Into the valley of Death
Rode the six hundred.

These nine lines prop up a scenario where questions are not to be asked. A soldier must never raise doubts, he must follow orders, even if someone else has miscalculated, even if he must pay the heaviest price for it. Tennyson’s poem argues that ‘the willingness of the cavalry to sacrifice themselves—without calling their orders into question—makes them heroes’.

But off the battlefield to not interrogate orders, especially when the orders arise from someone’s blunder above, is to absolve oneself of responsibility. Questions hold leaders accountable, and ink the difference between an autocracy and a democracy.

Today, the platform outside of Parliament where questions are being asked is both the street and online. But social media is not always the best place for dialogue. A tweet is a statement. People might leave replies, but the original Tweeter can easily choose to ignore it. It has none of the vigour of the soapbox, where the speaker was poised elbow-to-elbow in the public square and would be compelled to engage. For politicians and celebrities, leaders and superstars, social media is often merely a megaphone, a way to amplify their own voices and to swat away questions. Today the search engine, or more precisely an algorithm, has become our hub for questions. A search engine does not allow for the back-and-forth of dialogue. It does not truly listen. Asking questions and finding answers is both the supreme act of patriotism and rebellion.

(This is the first instalment of a column that will profile a different word every month. We begin with ‘question’)