Antonio Banderas: ‘The stories of my life can be written by music’ 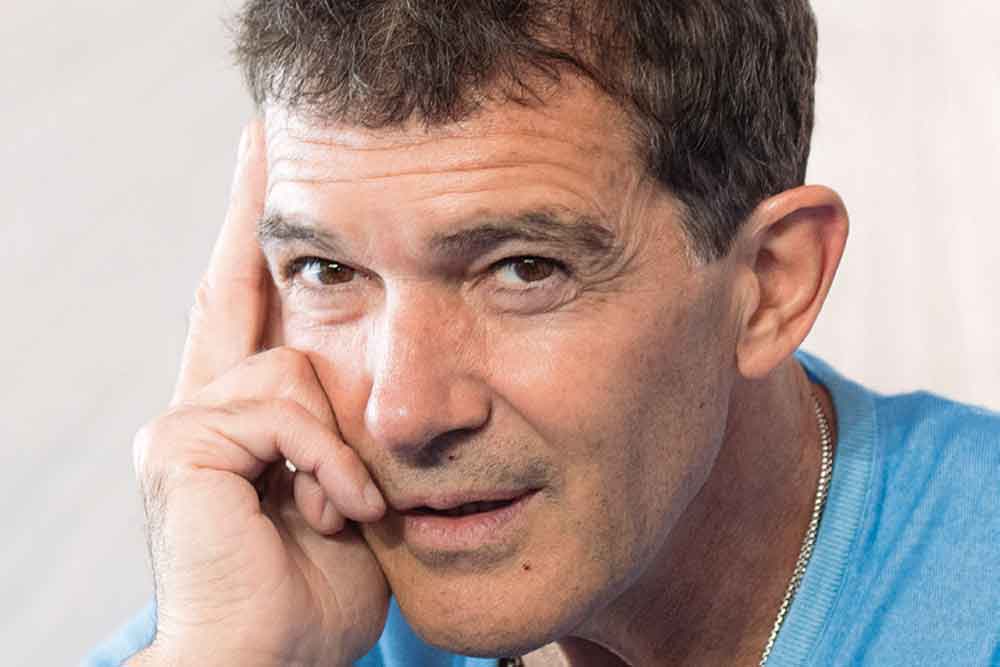 Fifty-seven-year-old Antonio Banderas is a Spanish actor, singer and producer. He will soon be seen in The Music of Silence, where he plays blind singer Andrea Bocelli’s voice coach. He is now playing Pablo Picasso in the TV series Genius. He’s shooting in Budapest. We chat with him via satellite hook-up since I’m in Los Angeles. He is unrecognisable without his trademark head of hair or bushy eyebrows.

How do you feel when you see yourself in the mirror bald and eyebrow-less?

I actually love changing my appurtenance and I was just crazy when they said to me, “Antonio, it is better if you shave your eyebrows because Picasso had different eyebrows, and there is going to be a dead zone in your face.” I love that because then I have an excuse to actually do something like this. If I did something like this in real life, people would think that I am a little bit cuckoo.

Given your role in The Music of Silence, what is your relationship with music and what are you listening to these days?

My relationship with music is enormous. I never did it professionally but I play the piano, guitar and drums. I travel with a microphone all the time, so I plug myself in and I just sing and compose and listen to a lot of music of different styles. If you see my playlist on my computer, I have music from different backgrounds that are part of my life. I can do a map of my life with music and I will tell you what happened and what I was listening to in 1976 and 1978. The stories of my life can be written by music: The Beatles, Rolling Stones, Mozart or Wynton Marsalis.

Do you paint? And what kind of art do you like?

I am not a good painter, but neither am I a bad one. I have been painting a lot since Ron Howard (the director of Genius) came to London and we had this meeting and he said, “Okay, we want you to be able to paint.” So I bought a bunch of different size canvases, oils and acrylics and I just started painting. I copied several of the paintings of Dora Maar, I would say six or seven of them, because I wanted to get familiar with the brushes and the materials a painter uses. You know that I was going to play Picasso before? With Carlos Saura, the Spanish director, and it may still happen. I was living in Los Angeles at the time so I studied painting under a professor. I studied drawing and painting and I did the entire Guernica. It took me four months to paint it. Picasso painted it in 33 days, but he could have done it in one day. When you see the movie, I am taking up a brush for the first time in my life. Picasso was an easy painter to reproduce because he was so secure when he painted; basically he got an idea and went for it and with one stroke. I have a Picasso that I bought years ago in New York and there are certain areas of that drawing done in one shot and it encompasses a lot of detail, it’s just spectacular; and so this is easy to imitate because he doesn’t do too much. He’s very simple in his paintings. There are documentaries that I watched. One is called The Mystery of Picasso where you can see that his painting is very light; it’s almost like Zen for him.

How would you describe Picasso?

Picasso is a complex character. He’s a mystery even to me. I have been studying him for a long time because he was born two blocks from where I was, so I was always curious. We both went into the world leaving our land behind. He was very controversial not only as an artist but in his personal life, all the relationships he had with women. He was arrogant with some, and to others he was sincere. He never accepted the rules of the time; he was always playing outside of the rules and that probably damaged a lot of people surrounding him. He’s enormously interesting.