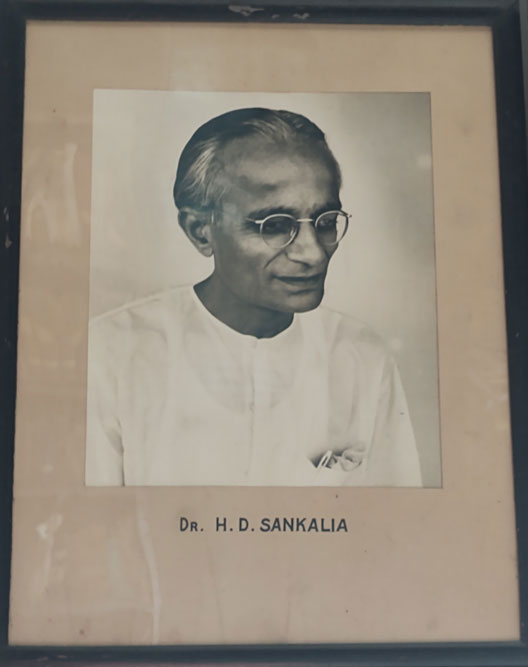 
Ask any Indian student of history or archaeology to name a pioneering archaeologist. The name of HD Sankalia (1908-1989) is sure to come up thanks to his stellar contributions in the field that continue to be talked about. But it is unlikely that one would come across a biography of his that covers the breadth of his activities and scholarship. The best account of his life can be found only in his memoir, the meaningfully titled Born for Archaeology.

But luckily there is a source – a boon of sorts for aspiring researchers — for learning much more about him than we now know: the books – some 1000 of them – that he has donated to Pune’s Deccan College where Hasmukh Dhirajlal Sankalia spent almost his entire career, first as a professor of archaeology and then as its director. His love for the institution meant that he bequeathed in a will his entire personal library to the institution, and these volumes offer us a telescopic view into the life and times of the man.

In almost every book of his that is now in the safe custody of Deccan College, one can discover Sankalia in his own handwriting, leaving directions and comments. These books include the hundreds of those that his students, teachers, and friends had gifted him. For example, inside the book by Kapila Vatsyayan titled Bundi Gita Govindam, gifted to him by OP Tandon, then a professor at the Banaras Hindu University, Sankalia leaves an instruction that this book be kept at the College library. Renowned scholars who closely followed Sankalia’s work would send early copies of their work with greetings to him and he wanted them, too, to be kept in the library. These include an anthropological study of the Eastern Himalayan communities by DN Majumdar and TC Sharma, a translation of Kalidasa’s Malavikagnimitram by Subrahmanya Iyer, and a history of the Andhra dynasty, Vishnukundinas, by Sankaranarayanan, an epigraphist for Mysore. All of these books contain reverential messages left for Sankalia by the authors. Yet within months of receiving them, Sankalia invariably gifted them to Deccan College despite them being prized possessions for any personal library.

I stumbled upon two archaeological surveys, and also a neatly hardbound copy of a book titled Cure: Aches and Pains through Osteopathy, featuring on its cover a middle-aged man massaging the back of a woman, among the books from his collection. Among these collections are his The Readers’ Digest editions from the 70s, a segment of his reading that is unaccounted for in either his own work or the essays of his friends. His jottings on these books and periodicals provide enough material for those interested in writing about various facets of his life and interests.

Sankalia was also critical of some works and had no hesitation in being blunt at times. A friend named ‘Dangoria’ gifted him a book titled Hinduism in the Space Age by Vedavyas (a civil servant). Sankalia’s note at the back of the book is proof of his great disappointment with this work. He scribbled, “The author has read extensively, European literature on India and based all his conclusions – and arguments upon what foreign writers had to say about us. Unfortunately, he has no arguments of his own.”


Sankalia had initially studied mathematics and Sanskrit at the University of Bombay. But he decided to pursue archaeology after reading the now-controversial work, ‘The Arctic Home of the Vedas’, by Bal Gangadhar Tilak, during family vacation in Nashik, Maharashtra. He pursued his post graduation in archaeology and later worked in Nalanda, Bihar. He also went on to do his PhD on the ‘Archaeology of Gujarat’, guided by FJ Richards. It is in this study that his prowess with proper documentation of excavations comes to the fore. His time in London pretty much made the archaeologist that he later became. Among the greats who guided him were Sir Mortimer Wheeler, whose pattern of site excavation remains the standard archaeological method.

In 1937, he returned to India and after a brief interval of short-lived jobs, he was named the head of archaeology at Deccan College in 1939. Motivated by the assessment of the great prehistorian Robert Foote (1834-1912) that there was a gap in the physical record between Palaeolithic (Old Stone Age) and Mesolithic (Middle Stone Age) ages in India, he conducted a tour and excavations in Gujarat, initially bearing no results. Later, with the help of the anthropologist Iravati Karve, at the site of Langhnaj, he was able to recover a stone-age skeleton. He undertook studies of sites across the Deccan ranging from neighbourhoods in Pune to Kolhapur to Maheshwar (1952) and Nevasa (1956) to Inamgaon (1967). He was occupied in his later years with the archaeology of the Ramayana and the Mahabharata and wrote books for the masses sifting truth from fiction in these traditions; expectedly these did not go without ruffling feathers. And angry letters were dispatched to his residence at Deccan College.

Sankalia’s baby steps into archaeology were inspired by the guidance of Fr. Heras, his teacher at Bombay who suggested that as much as mathematics and Sanskrit studies would lose a prodigy, archaeology was a far perfect fit for him. Fr Zimmerman, his lecturer, later suggested to him that Sankalia work in detail on his observation that Sanskrit playwright Bhavabhuti’s Uttaramacharitam had significantly imitated Buddhist writer Dinnaga’s Kundamala – resulting in Sankalia’s publication of an essay on that subject for the St. Xavier’s Journal.  Before leaving for London for his PhD, he worked on ‘Chaitya Caves in the Bombay Presidency’ for a Prize instituted in the honour of India’s first archaeologist Bhagwanlal Indraji. Not surprisingly, several of Sankalia’s obituaries mention the prize but say nothing on what the prize indeed was.

In his collection at Deccan College, there’s a green hardbound book upon which a sticker indicates that this was gifted to him along with the Bhagawanlal Indraji Prize in 1933. The book was civil servant GR Hunter’s The Script of Harappa and Mohenjodaro and Its Connection with Other Scripts, but spectacularly enough, published in 1934! How does one explain this obvious irony? On a swift browsing through the pages and the font of the text, I could see that this particular edition was a pre-print copy of the book. This book was the PhD dissertation of Hunter. On the back side of the front cover of the book I noticed a date from 1935 with the word ‘London’ on it. Maybe that must be the day Sankalia had it hardbound during his stay in the city.

Speaking of cities, the famous archaeologist also wrote on his books dates and location of the purchase. Thanks to this habit of his, we know that he bought KA Nilakantha Shastry’s Aspects of India’s History and Culture in Mysore in 1974 and recently-deceased R Nagaswamy’s Tantric Cult of South India in Trichy. That work had been developed from a PhD dissertation of Nagaswamy guided by Sankalia at Deccan College.

The social role of history and archaeology were always of great interest to Sankalia. To him a historian was simultaneously a university academic and a communicator. It was the duty of an academician to not just be transparent about his work, but as his student MK Dhavalikar says in his obituary, always be accountable for tax-payers’ money because a great deal of Indian scholarship has always been funded by public money. Sankalia had subscriptions to all major journals including that of the Bharatiya Itihas Samshodhak Mandal, founded initially as a revisionist guild of Maratha historians, and known by this time and even today for their Marathi publications and for debating on questions that common Maharashtrians relate to. Sankalia retained his proficiency in Gujarati through continuous reading. Quite close to Hunter’s volume, I was able to locate the book titled Arabic and Persian Inscriptions in Saurashtra by fellow Gujarati Harprasad Shambhuprasad Desai. Although there is nothing ‘Gujarati’ per se in the content of the book, the author from their familiarity writes a note in Gujarati and signs it for Sankalia. This is only one example of books written on Gujarat and in/by Gujarati (s) where the authors and Sankalia sign in their language. A particularly special document is the Gujarati translation of Sankalia’s memoir, Puratattvane Sharane by Shashin Ojha. He seems to have been so firmly and steadily in the Gujarati ‘frame of mind’ so-to-speak that he writes his usual note directing the book to the Deccan Library in Gujarati as well!

Meanwhile, Sankalia was critical of the attempts to impose Hindi across the country and on the occasion of Tamil Nadu’s Anti-Hindi riots of the 1960s, he stood in the favour of the southern State. The scholar’s charm was in arguing his case by citing historical trends. In speaking about attempts at banning beef he says: “No time in India’s long history was cow-slaughter completely stopped. It could not be enforced even in a Hindu state by a ruler like Kumarapala who was a great patron of Jainism.”

However, these defiant and clear-cut stances did not flow from an agnostic rationalism as is common in modern academia. Sankalia appears like a much more grounded humanist; this meant that he never fully broke off from his familial heritage. He continued to live the life of a faithful Vaishnava of the Vallabhite tradition. Throughout his life he believed in Indian astrology. Despite the obvious lack of structure in his affective memoir, for three full pages he breaks into a positive appraisal of astrology. And he consistently maintained his reading of astrology and mysticism-related books (beginning with the Bhrigu Samhita at a young age, which according to him predicted his archaeological inclination).

What is perhaps missing from these books is the story of intellectual interdependence between Iravati Karve and Sankalia.

Revanth Ukkalam
The author, a student of Sanskrit at Deccan College, Pune, and an alumnus of Ashoka University, runs a Podcast titled Pravaha. He is also a talented whistler

The Linguist and the Epidemic