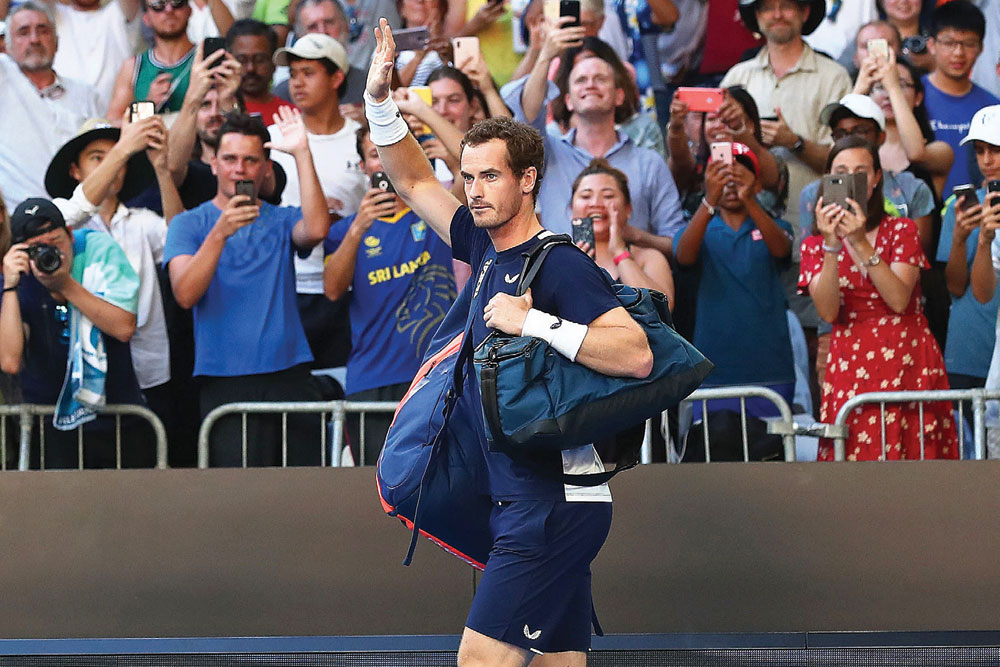 IF IT IS over, and Andy Murray’s life as a tennis player may just be, it can now be said that it was spent in an exhausting and perpetual chase of something elusive. In his inert state, Murray was a human scowl. He muttered under his breath and slumped his shoulders and dragged his feet and choked on fresh air; his dystopian energy blackholing other energies and wilting roses. But when a fuzzy ball was hit in his direction, it spark-plugged Murray’s leaden legs to life and then he was off, chasing green spheres, chasing greatness, chasing Grand Slams; chasing the game’s goats and quite often, chasing wild geese.

When he was a toddler, Murray chased after his brother Jamie, a year-and-a-half older and a year-and-a-half wiser on the tennis courts of Dunblane, Scotland. Before his tenth birthday, Murray was already chasing down the idea of becoming Britain’s next Tim Henman; a path that would eventually lead him to Wimbledon, where he would chase his ghosts and chase history and the ghost of Fred Perry would in turn chase him on sleepless nights. In his teens, he chased after his mother Judy to cough up the money to send him to an academy in Barcelona, because in Murray’s cross-wires was this Spanish kid who was the best in his age-group and this Spanish kid trained in Barcelona and now Murray was in Barcelona and chasing Rafael Nadal. Even in the pomp of Murray’s career, Nadal’s game and preferred surface remained a stride too far for him to catch, so he spent the peak of his professional life chasing down a boy possessed with a similar set of tennis skills to his own and one who was born a week apart from him, Novak Djokovic.

In the end, his withering body chased (and was outrun by) the most unforgiving opponent in sport, the clock. Nadal is a year older than Murray is and Federer is seven years more drained than he could ever be. But leading into this Australian Open, Murray’s ailing hips had aged him more than his rivals, and in a room in Melbourne he held his cap over his weeping eyes and announced that he could well be forced out of the race, five months shy of his 32nd birthday. The following day, in Melbourne Arena, an unwilling body was put through the paces of what, in all likelihood, could be his final, bitter chase. Murray chased his first round opponent, Roberto Bautista Agut, and was soon chasing a straight sets scoreline. He reeled in Agut and, defying his body and our belief, he reeled in the scoreline, but what he was really chasing was time; and when this old Murray couldn’t reel in the Murray of old, for Sir Andrew Baron Murray, three-time Grand Slam champion and two Olympic gold medallions hanging from his bust, the chase had ended at last.

It had to be Melbourne. Murray will always be grateful to New York for breaking his jinx (in his fifth attempt at a Slam final) and to Wimbledon he is forever indebted—for giving him what the venue hadn’t given a British man in 77 years; for giving him two out of his three Grand Slams; and for giving his half of his Olympic medals. But it was at the Australian Open where he first believed that his best, in its most human and naked form, was good enough to take the fight to the greats he was surrounded by at the top of the pyramid; if it were a real pyramid, and tennis’ pecking order had to be depicted on hieroglyphs, then Murray would at best be a pharaoh to the jackal/crocodile/sun-faced gods of Djokovic, Nadal and Federer.

That realisation—that he too could go toe-to-toe with the supreme beings; that he too could one day become a supreme being—dawned upon Murray in the semi-final of the Australian Open in 2012 (against the greatest Plexicushion player of all time, Djokovic), and those privy to the moment at the Rod Laver Arena will never forget his transformation from man to man-mongrel. I too was court-side; and as a lifelong Murray fan, that evening is the evening that has most often come to my mind since his (quasi) retirement speech, and that evening is perhaps what I shall forever remember him for. Pinning one’s hopes on Murray in this era of glut perhaps stems from an underlying current of masochism. But in the sparse few moments when the haze of suffering lifts, the joy a Murray fan feels is more blissful than anything else in tennis.

Within what seemed like minutes, Murray was down a set and a break to Djokovic, the defending champion who had nearly killed Murray’s will to play the sport with a straight sets win (the Serb had conceded all of nine games) in the previous year’s final. But the Murray of 2012 was ostensibly different from the Murray of 2011. He had a new fitness trainer in Jez Green, who had overseen Murray’s physical metamorphosis from gawky kid to a Nadal-like specimen; and he had a new coach in Ivan Lendl, who had pervaded Murray’s headspace so Murray wouldn’t have to. Hence Murray muttered under his breath and slumped his shoulders and dragged his feet and kicked on, breaking Djokovic back to win the set and soon he led by two sets to Djokovic’s one.

“You’re going to have to go through a lot of pain… there will be a lot of tough points to play when your legs are sore and your legs are burning,” were Lendl’s exact words to his ward before this match began (later revealed to us in the press room) and Murray took them to heart. Djokovic hurried through the fourth set, 6-1, and was up 5-2 in the fifth when Murray, well into the fifth hour on this court and the longest match of his life, tapped into a fuel-source he didn’t know he had. He broke Djokovic twice when the two-time Aussie Open champion was serving for the match and the contest that began on a Friday evening had carried on into the wee hours of Saturday.

Truth be told, it carried on for the rest of the year, and the rest of his career. Murray lost that match, but the Murray of Saturday was a wholly different beast to the Murray of Friday. The Murray of Friday had reached three Grand Slam finals, two of them in Australia, and not won a set. Half a year on, the Murray of Saturday made the final of Wimbledon, the first British man to do so in 76 years, and won the opening set against Federer, who, as someone once said, remains the best performer on grass since Jimi Hendrix. A month later, the Murray of Saturday finally became the Murray of Sunday, winning his first Slam at US Open, against Djokovic in five sets, including a first set tie-break (possibly the tie-break of our times) that alone lasted an hour-and-a-half. It was a year soaked in symbolism: in 2012, each of Djokovic, Nadal, Federer and now Murray had claimed one Slam each, and the era of the Big Four was ushered in.

If the ultimate goal of tennis, or all of sport for that matter, is to inspire, then Murray will always remain its most feasible hero. Ask Alexander Zverev, the brightest talent on the horizon, who, in his attempt to replace Murray in the Big Four, has employed trainer Green and coach Lendl to become Murray. To channel Murray is to embrace a mindset and not a technique. Defend like your life depends on it. Leave nothing on the court. Push your mortal body of flesh and bones more than other mortals have ever pushed theirs until, in this exhausting and perpetual chase of the elusive, the gods blush back in shame.