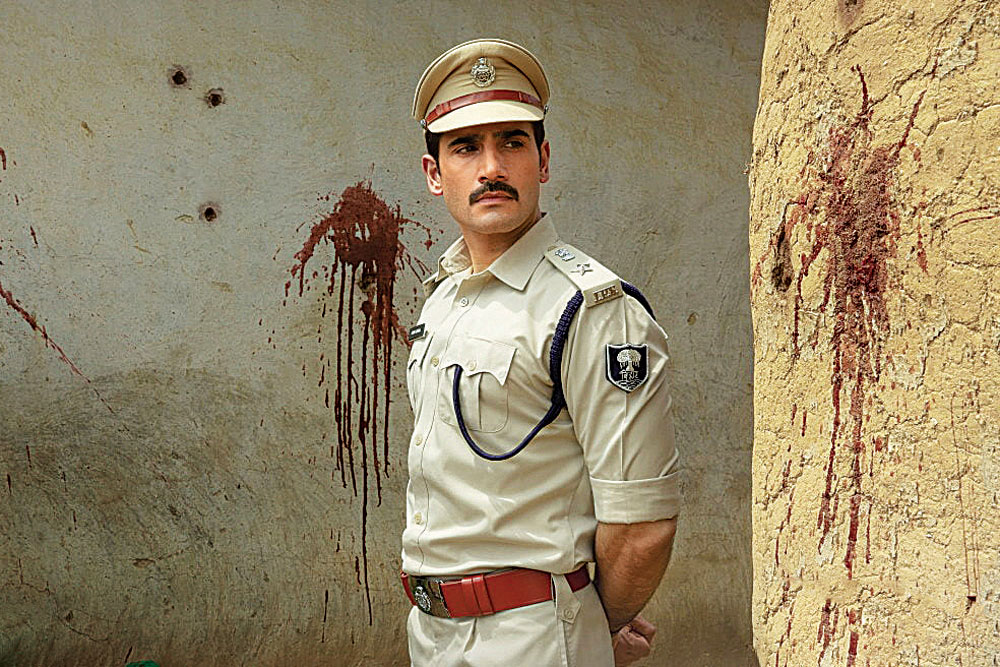 Bihar has become the backdrop for much of the political drama that happens in Bollywood streaming. Caste-driven politicians, policemen with spines in short supply, and a general public that is usually caught in a pincer grip between the state and its instruments. Neeraj Pan­dey’s Khakee has all this and more, with incidents that highlight the unique state of Bihar. Early on, an old timer tells young Amit Lodha (Karan Tacker), an Indian Police Service probationer, that he can win 50 per cent of the battle for Bihar by saying hum not main. “Hum main ek apnapan hai, jo main me nahin hai (Hum has a sense of belonging which main doesn’t),” he tells Lodha, who is based on a real life police officer. Lodha’s career in the force runs parallel to that of Chandan Mahto (Avinash Tiwary), a lower caste, uneducated truck driver who rises to infamy as a series of unintended consequences enable him to become a powerful don. But what about how the oppressor was once op­pressed? The caste slurs, the beatings, the insults directed at his masculin­ity, what makes a man tip over into criminality? Khakee examines this and a lot more about what drives men to use violence to settle all disputes, big and small. And also what it would take to put a stop to it. “Jab aag ko jalne wka darr ho, to bastiyan veeran hone se bach jati hain (When fire is frightened of getting singed, you can prevent large scale de­struction),” says the voiceover. Khakee is a worthy addition to the sub genre best known as ‘Bihar badlandia’.

Why watch it: Great lines, a brilliant Ashutosh Rana, and Ravi Kishan as a mafia don

It’s the season of mafia dons. This time, the setting is Dharavi, Mumbai’s infamous slum with its narrow streets and big hearts, where blood flows into water, where cultures coexist, and where dhandha is ganda (business is dirty). Suniel Shetty stars as the elusive Thalaivan, a Nayakan sort of don who provides succour for the weak and suparis for the strong. Vivek Oberoi is a police officer fond of quoting Shivaji’s guerilla warfare tactics. And Sonali Kulkarni, a criminally underused actor, plays the ruthless chief minister who has ordered a hit on Thalaivan, part legend and all real, in order to win the next elections. She may not have the best lines—but she is made to repeat them in English and Marathi so we see how serious she is. The music is loud enough to keep the viewer distracted and everyone has his own signature tune.

Why watch it: The guilty pleasure in seeing a well-made gangster series


There’s such a dearth of old-fashioned movie stars at home and abroad that the world’s happy to take even mildly amusing movies starring them. So welcome George Clooney and Julia Roberts, two of the world’s most charismatic stars, and thank them for lighting up the screen, even if it is with fake grouchiness and fake smiles, as they wile and guile their way through their daughter’s wedding. They think she’s throwing her life away, and will regret it all her life, like her mother (Roberts) did. Of course, it’s just an excuse to listen to the rat-a-rat dialogue between the two stars, lots of eye-roll­ing, and drunk dancing. Clooney and Roberts have the power to be Cary Grant and Katharine Hepburn but this isn’t quite The Philadelphia Story (1940), but for our star-starved appetites, it will do.

Why watch it: Five words: George Clooney And Julia Roberts