Shyam Benegal’s heart is still in the right place, but has he lost much of his early cinematic brilliance? 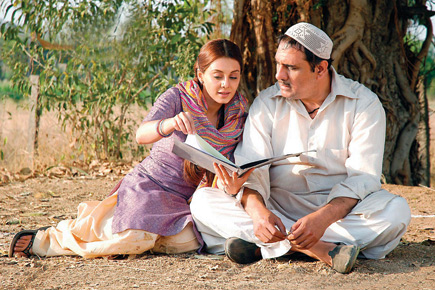 Shyam Benegal’s heart is still in the right place, but has he lost much of his early cinematic brilliance?


The decline of Shyam Benegal as a film director has been difficult to watch. No doubt, he has been prolific over the past four decades, but after his breakthrough films for the Indian New Wave in the 1970s—Ankur, Nishant, Manthan and Bhumika—he has made few films of style and substance. The combative attitude to social injustice and government apathy is still there, but the passion for new and innovative cinema has disappeared.

For instance, the narrative structure of his latest output, Well Done Abba, is simply lackadaisical filmmaking. The story is told by a chauffeur to his ‘saheb’ on a journey from Mumbai to Pune. For the duration of the movie, we cut back periodically to see the driver in front, the executive frozen at the back. So little is Benegal interested in the cinematic design of his movie or the amusement of his audience, he doesn’t even stop the car for a cup of tea to break the static framing.

The driver, Armaan Ali (Boman Irani), is talking about his village near Hyderabad and how maddeningly difficult it is to avail of government schemes that he is perfectly entitled to. Water, for instance, is a huge issue and the villagers have to walk miles for a bucket. But when Armaan applies for a scheme to have a well dug on his land, he enters a labyrinth of corruption and evasive bureaucracy.

At one point in this Kafkaesque maze, the civil engineer puts on government record that a freshly-dug well now exists on Armaan’s land. When challenged by the naked eye that sees none, he suggests lamely that, well, these sort of things do happen.

It is at such moments of acutely observed reality that the hypocrisy of political parties, their electoral promises of schemes for the poor, and their lack of intention and will to implement them is exposed. This is Benegal at his best, and would that we have more of such moments. Sadly, much of Well Done Abba is so full of clichés that we reach uninterested boredom very quickly.