War for the Planet of the Apes Movie Review

War for the Planets of the Apes is the slowest film in the series, but is the one that holds your attention the longest 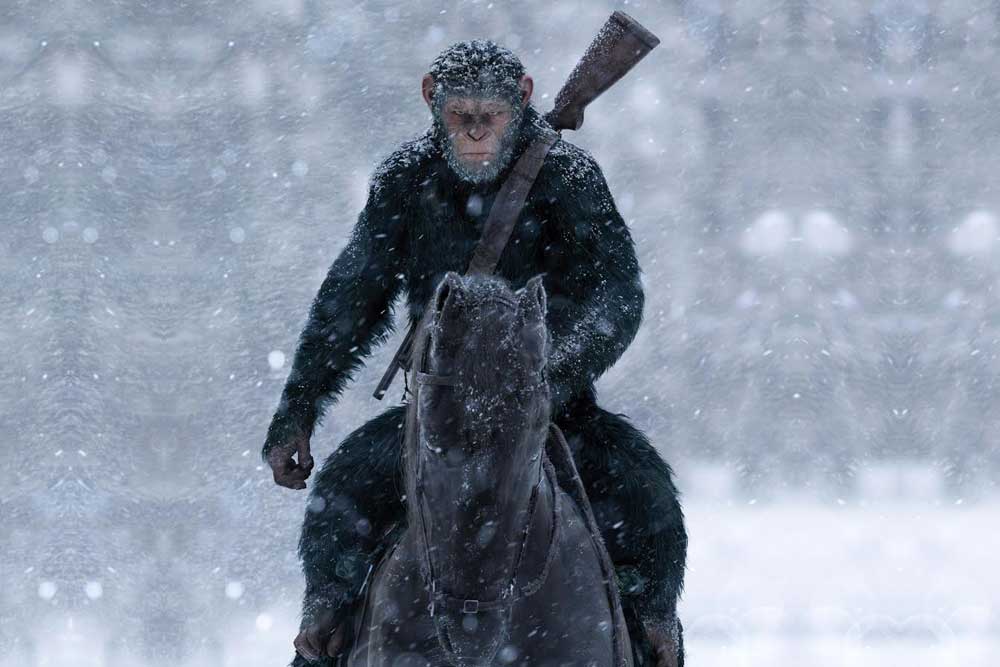 Half an hour into this movie and you could be forgiven for being reminded of a Sergio Leone Western. Even though the content is anything but. This third installment of the Planet of the Apes reboot for the millennial audience, is about Apes at war with humans. The civilizational sensibilities of the apes are much more ‘human’ and evolved than that of the remaining people on earth who have lost any claims to be guardians of the beautiful planet they have inherited, and now sparsely inhabit.

Director Matt Reeves uses wide open spaces to show us apes riding horses. He places the landscape in long shots and lingers on them lovingly, like Leone did. When he cuts to close-ups, they are in the extreme, with the faces of the apes, especially their leader, Caesar, commanding the compositions. The pacing, too, is deliberate and measured, and used to clearly establish the point of view he has taken right through the narrative. It is a story told through the apes’ perspective, since human beings are no longer considered worthy of holding any moral position in this, or any other other conflict.

Humans are in the heart of their darkness, led by ’The Colonel’ (Woody Harrelson), a character reminiscent of Joseph Conrad’s Mr. Kurtz and Francis Coppola’s Colonel Kurtz in ‘Apocalypse Now’. He has a camp where he lynches rebellious apes and imprisons others to work in a forced labour commune, building a ‘Wall’ at the border. Perhaps the director has gone a little overboard here to emphasize his political analogy of right wing extremism. But the point he consistently makes in his depiction of humans is that they are at their civilizational nadir, and that their fascist descent into psychotic violence have had the effect of lowering their intelligence quotient. Their leadership has failed to realize that war, whether with apes or other humans, whether won or lost, will destroy their own species.

Caesar of the Apes (Andy Serkis), on the other hand, is a contemplative leader of his tribe who has abhorred the unnecessary use of violence, and views it as counter-productive. But even such a noble commander gets affected by his personal loss and starts to succumb to the human predilection for self destruction, until he is able to step back and take a look at what humans and apes have done to each other over the course of their narratives on this planet.

War for the Planets of the Apes is the slowest film in the series, but is the one that holds your attention the longest. Though the make-up, costumes and SFX are good, the movie’s real strength is in the characters created, and in the laid back pace with which it presents them through an engrossing story.