Vijay Deverakonda’s journey to a pan-India blockbuster may have been stymied by a poor judgement call, but he is a bona fide Telugu star 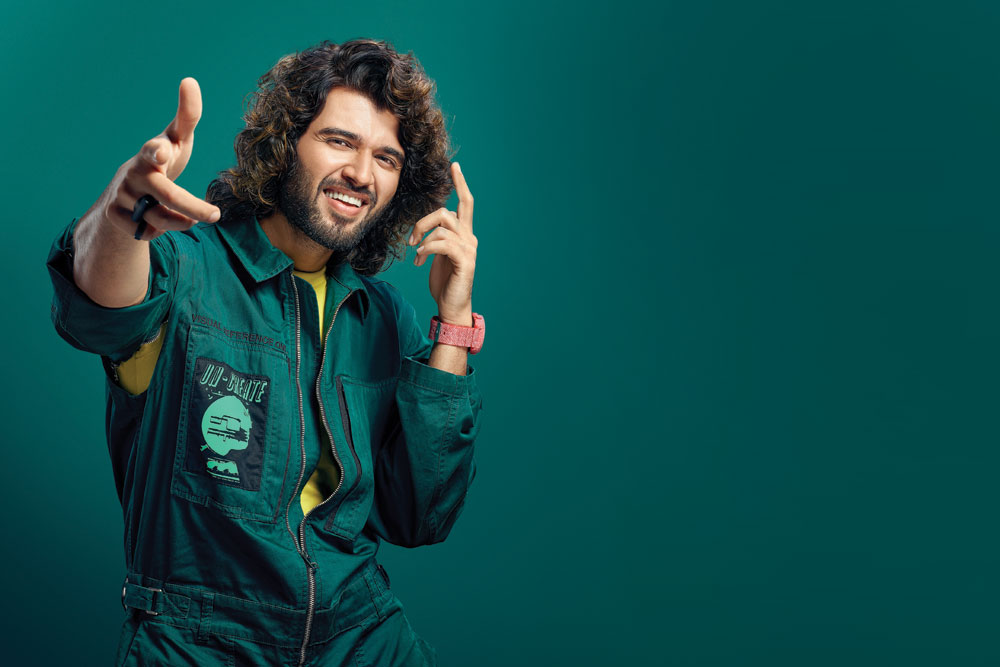 
WHEN HE WAS in the third year of his BCom at Badruka College of Commerce and Arts in Hyderabad, he would spend most of his time watching DVDs of Hollywood movies. Times were tough financially and one day his father asked him why he was wasting his money if he had no wish to study. He told him to either earn his living by farming the family’s small plot of land or to learn cooking as preparation for a hospitality career. “My father believes in tough love,” says Vijay Deverakonda. “I got angry too and told him I wanted to be an actor but did he have any money to send me to the New York Film Academy or the Lee Strasberg Theatre & Film Institute? My father didn’t say anything but five days later, asked me to get up early the next day so he could take me to the Sutradhar theatre company,” recalls Deverakonda.

Deverakonda, 33, spent the next three months sweeping floors, help­ing set up lights, doing costumes, and handling ticketing. He once walked the length of the hall and was applauded for his work in ticketing. That got him addicted to the cheers. But the applause has been muted for his first Hindi film, Liger, which though directed by Telugu language director Puri Jagannadh, was produced by Karan Johar’s Dharma Pro­ductions and Hyderabad-based produc­tion company Puri Connects. A movie about a mixed martial arts fighter from the streets, more than three years in the making, it was intended to further Deverakonda’s stardom but has interrupted it. “I believe Liger will be the film to make people forget about Arjun Reddy (the 2017 movie, which established him as an obsessed lover),” Deverakonda told me in an interview before the release, “just as before Arjun Reddy I was known only as the actor from Pelli Choopulu (a 2016 romance that put him on the map).”

And therein lies the essence of contemporary stardom. As the experience of Aamir Khan with Laal Singh Chaddha, Ranveer Singh with 83 and Ranbir Kapoor with Shamshera shows, a bad film cannot save a star. But as filmmaker Ram Gopal Varma says, “Liger wouldn’t affect his Telugu market, because he has already given three Telugu films that have made more than `100 crore at the box office.”

The film, heavily promoted across 17 cities among young people, mostly in malls, epitomises the struggle of the new age movie star. Liger was conceived as a reaction to the failure of Dear Comrade, Deverakonda’s 2019 romantic film, which was critically appreciated but didn’t work at the box office. From all accounts, Deverakonda approached Puri Jagannadh (founder of Puri Connects, along with Charmme Kaur), who had had a hit at the same time, iSmart Shankar, to collaborate with him on a typical masala entertainer that would be critic proof.

Deverakonda and Jagannadh then approached Karan Johar with the idea. Johar says he first met Deverakonda after his mad and crazy Arjun Reddy. “I was an absolute fan,” he says. “I just loved that he had such silent swag, such composure. What a superb actor he is. I was very excited to collaborate with him and I’m so glad he came to me with Charmme and Puri sir and said, ‘Let’s make this a pan-India expe­rience with Liger.’” The movie opened well but sank soon after because of word of mouth (it has made `69 crore in the first 12 days), but Deverakonda’s journey to pan-India visibility has been a surprising one. No less to the star himself, who says he was stunned by the crowds who greeted him in cit­ies such as Lucknow, Jaipur and Patna. Thanks to satellite re-runs of dubbed Telugu films and the deep emotional connect of Arjun Reddy, Vijay Deverakonda is now a recognisable face, especially among his followers, known as Rowdy fans.


“We don’t do mall visits in the South. But then I went to Mumbai and saw the number of people chanting my name, then I went to Patna, Ahmedabad, Baroda, and then Delhi, which I was told is the last frontier for southern actors,” says Vijay Devarakonda, actor

For someone who doesn’t come from one of the many dynasties of the Telugu film industry, and went from a middle-class life dwelling in a series of rented homes to a `15-crore bungalow in Hyderabad’s Jubilee Hills, it has been an achievement. Deverakonda spent 10 years in a boarding school in Puttaparthi, Andhra Pradesh, which is a free school attached to the Sathya Sai Baba ashram. “My mother was obsessed with the idea of a good education for my brother and I,” says Deverakonda, and the ashram school was the only way possible. So she spent hours tutoring the boys for the entrance exam. Deverakonda cleared it and was there till he was 16, doing particularly well in sports. Classes XI and XII, spent in Hyderabad at Little Flower Junior College, were a complete cultural shock, and Badruka College even more so. “I couldn’t even look girls in the eye. I couldn’t talk to them. My knees would be knocking,” he recalls.

Theatre, thanks to his father, was a refuge since he wasn’t sure of what he planned to do in life. Vinay Varma, his mentor at Sutradhar, remembers him well, “He was a confident boy the moment he stepped in and seized every opportunity rather than being reticent as a newcomer. He never held himself back from performing any task assigned to him. He was full of energy bursting at the seams, begging for exploitation,” he says.

That rootedness makes him con­nect with people, whether it is the `199- chappals he wears promoting his film, or the mango ice cream he used to make for his family and post on Instagram during the lockdown. His career was initially a means to provide his family with the facilities they didn’t have when they were growing up. “I love my parents to death. One of the biggest highs of my life is to see them in comfort,” he says, perhaps referring to the house in Jubilee Hills, the jewellery, and the security of smart investments such as a theatre and a production house. “My father used to make television serials so it was always my mother’s dream that her husband would take a shower every day, go to of­fice, and come back in time for dinner. Now my dad looks after me, my money, and my staff,” says Deverakonda. He talks about the hierarchy in families, where the poorer cousins would always have to be respectful to the rich uncle. “I didn’t like it. Now when my mother goes to a wedding or a family function, I can see everyone gravitating towards her. It gives me great satisfaction,” he says, his eyes flashing with a deep-seated emotion.

Is that angst, hurt, a psychic wound, or all three? Certainly, his most iconic and most polarising character carries all those emotions and more, as he makes a young woman his obsession without her consent, in Arjun Reddy, which did exceedingly well at the box office, even when it was remade in Hindi as Kabir Singh (2019). Deverakonda, as the doctor with anger management issues, was madness personified in a role that required him to stretch himself beyond credulity. It also attracted a lot of flak for elevating misogyny, which he has strenuously denied.

So who is Deverakonda? The man who bought a mansion in Jubilee Hills because his father feels that people respect you more if you live king-size? Or the man who rents a car (okay, it is a Range Rover) because it’s easier to let go of. “Honestly,” he says, “I don’t know. I am confused. I resist these things. Somewhere it is prepar­ing yourself that it is temporary, that don’t be attached to all the good stuff. I have broken it down vaguely to some sort of split personality, growing up in a protected spiritual environment till I was 16. The boys I grew up with are still my closest friends. We spend every New Year together. The other part is the guy who was thrown into Hyderabad, who decided to adapt, who didn’t want to be treated as less, simply because someone else had more money, or a bike, or a girl. I decided I want my space, I don’t want to crouch. I want to be respected. So I became another person. The world outside the ashram broke some of my friends, sent them into a shell. Some of us decided to adapt. I had to change a lot to deal with the ways of the world.” But he says he is “both these people, one part who lives with aggression, another that loves and wants to let live”.

“I decided I want my space, I don’t want to crouch. I want to be respected. So I became another person,” says Vijay Devarakonda

He has certainly become a national­ly recognised name, with many outside the southern states having watched his edgy movies such as Geetha Govindam (2018) where he plays a nervous young lecturer; Dear Comrade where he is a college rowdy who wants the love of his life to fight for what is right; and World Famous Lover (2020), where he is a writer fantasising about his life. A great degree of frankness about sex is a common thread in these movies. He says, “When I started the promotions for Liger, the first event was in Mum­bai, and I kept asking my producer, ‘Will there be people there?’ We don’t do mall visits in the south. But then I went to Mumbai, and I saw the number of people chanting my name, then I went to Patna, Ahmedabad, Baroda, then Delhi, which I was told is the last frontier for southern actors. Till recently, I didn’t believe in destiny, luck or hope. I just believed in hard work, I felt I was the master of my fate. But now I feel there is a higher power watching out for me.”

Failure will test this emotion. It will also strengthen his resolve to connect with the audience. For now, he has Kushi, a romance slated for release at the end of this year with the other powerhouse of talent, Samantha Ruth Prabhu, with whom he starred in Nag Ashwin’s beloved Mahanati (2018).

The middle-class boy has fulfilled his mother’s desire to change the family’s fortunes. Now he has to decide how to change and challenge his most unusual career.