The artist indubitably controls the work of art, but if the artist can somehow expose the seams of his own art it allows for a question to be raised; in raising it, we question both honesty and authority, which the so-called objective documentary so easily assumes 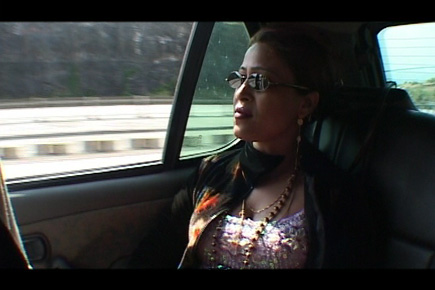 I’m the Very Beautiful is that very rare thing: a documentary about a woman made by a man.


I’m the Very Beautiful is that very rare thing: a documentary about a woman made by a man.

So far in documentary cinema (Indian and international), as in other modes of expression, it is primarily women who have chosen to tell women’s stories. And women’s stories have often been squeezed into that pigeonhole called “women’s issues”. Also, the majority of male filmmakers have tended to choose “public” themes as being of greater political significance. Here is a film that unburdens itself of that history.

For the viewer the first impact of Ranu Gayen, the ‘very beautiful’ one of the title, is overwhelming. The multiply pierced ears bearing a barbed wire of yellow gold rings, the high heels that would do a drag queen proud, the red nylon pants clinging to an unabashed paunch, the raunchy screensavers on her mobile phone, the dancing eyes and big smile full of unproblematic invitation, her assertion that she loves to know the ways in which men desire her.

This sequence is followed by one of the most tender sequences in the film – Ranu, as she climbs a hill, tells the director she is 30. Oh, he asks, and how old is your daughter? Ranu thinks and says: 19. When they stop for a rest she asks: isn’t age catching up with us? The director laughs and says it already has and they share a joke about her “real” age. Then they walk on. The beauty of the sequence is not that Ranu is caught out in a lie, but that, with that moment, we are easily charmed into accepting that Ranu can really be whoever she wants to be at any given moment, in whatever manner she is in the mood for.

As the film progresses we come to know Ranu in many ways: her history, her stories about her own life, how she understands herself. This is what makes it an extraordinary document; not only that it brings alive a mercurial and marvelous woman, or that it traces this unusual, ambiguous relationship between a bar singer and a documentary filmmaker, but because it is an unexpected insight into something of how one person can come to love another and how love does in fact find its way around differences. The film is not about “exposing” the truth of Ranu’s life; it is an attempt to bring us the charged experience of getting to know her.

In doing this, I’m the Very Beautiful recognises many nerves that are rendered perpetually raw for the kind of woman – of any background – who chooses not to conform and evokes exactly the quicksilver quality of bravado and vulnerability that many such women carry vis-à-vis the messy business of romantic/sexual relationships with men.

As the film traces Ranu’s portrait, it also creates a drop-shadow of the camera’s gaze, through sequences that play with the visual-sexual innuendo of film equipment. Through this the film underlines with the lightest hand how the truth of a moment is not fixed but is built from the encounter of two people at that particular moment even as it celebrates the idea of performance as part of biography, part of the construction of the self.

Despite this – or perhaps because of it – some will wonder if this business of the director putting himself in the film isn’t a bit easy and disingenuous. The feeling that subjects can construct their own reality, alone, without the filmmaker imposing his, sort of goes hand in hand with the myth of vérité, and it is always a good idea to question it. In the end, the artist indubitably controls the work of art, but if the artist can somehow expose the seams of his own art it allows for a question to be raised; in raising it, we question both honesty and authority, which the so-called objective documentary so easily assumes.

For me, I Am the Very Beautiful, while greatly dictated by Ranu’s rhythms, is also a very strong construction by the filmmaker, but being able to observe that construction also makes the filmmaker vulnerable and reveals for me several intriguing things. For instance, how men think! Questions about implicatedness are important as long as we don’t ask them with moral certainty. Because then, maybe, they lead us to a better understanding of the meaning that stories of other people hold for our lives.