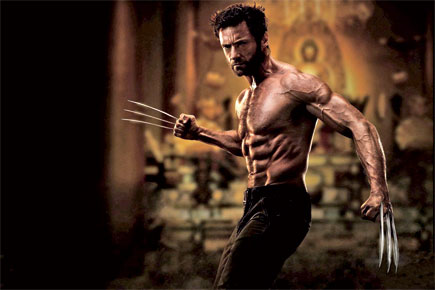 
Nagasaki was devastated by a B-29 bomber on 9 August 1945 and The Wolverine begins with this scene. Logan is Wolverine, a mutant who can heal himself and live an abnormally extended lifespan. He is a prisoner of war in Nagasaki at the time of the bombing and saves the life of a Japanese soldier. Years later, this soldier is a Japanese industrialist who has set up Yashida Corporation. He sends for Logan because he says he wants to repay him.

The film is shot largely in modern Japan, and of all the X-Men films, this is the most respectful to a foreign culture. Director James Mangold has said that in terms of ambience, he wanted to evoke the atmosphere of a Yasujiro Ozu film, particularly Floating Weeds (1959). He hasn’t succeeded—where is the tatami shot?—but he has put together a very watchable film by showing us an interesting social structure in corporate Japan and by entertaining us with a terrific action sequence aboard a bullet train from Tokyo to Nagasaki.

Logan (Hugh Jackman) returns to find the devastated city resurrected. This time he is protecting the grand-daughter of the man whose life he saved in 1945, and a persistent sense of deja vu permeates the film. Soon it will be ‘Nagasaki Mon Amour’, as Logan falls in love with his ward, Mariko Yashida (Tao Okamoto). Dare one say it, but a sense of regret for a transgression of history comes across in this gentle passage of film and it is all the more poignant because it happens in the most unlikely of places, a superhero movie.

The finale of The Wolverine is disappointingly familiar because it is whipped up in the usual implausible manner, with mindboggling obstacles that Logan has to circumvent or overcome, but till that climax the movie can be listened to for its conversation and watched for its panoramic view of a beautiful urban landscape.