It is engaging in parts, but is the life of Mark Zuckerberg really such a big deal? 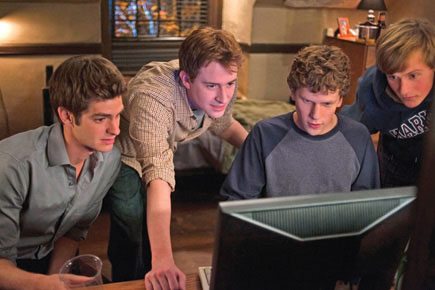 It is engaging in parts, but is the life of Mark Zuckerberg really such a big deal?


It is engaging in parts, but is the life of Mark Zuckerberg really such a big deal?

That Facebook was born of adolescent rage after a break-up, that FB’s function of cutting to the chase in the dating game was arrived at through a combination of hormones and loneliness, that a network of ‘friends’ on the internet is both expansive and insular, all this may be true. But how significant is it in the context of news or politics or economics or literature?

No matter how well the film is written, and some of the conversation in The Social Network is absorbing, the subject of the movie—about two lawsuits brought against Mark Zuckerberg by his contemporaries at Harvard who claimed they contributed substantially to the making of Facebook, yet were not duly credited or compensated—is not a life or death matter. Were it about any other corporate dispute, not a head would turn outside Wall Street.

The Social Network is engaging, but only periodically so. In its back and forth structure of cutting between the legal discourse in the boardroom and a subjective interpretation of what happened during the evolution of the site, the film purports to be about an important historical moment and adopts a tone of Ivy League gravitas.

The creation of FB needed ingenuity, not genius. The movie is about this talented, insecure, paranoid undergrad who plays off one friend against the other and works his ass off to get what he wants. Such behaviour is normal and encrypted in the wiring of every gifted maverick, but the film is determined to turn Zuckerberg (Eisenberg) into a multilayered personality, befitting of a Hollywood protagonist.

In spite of this, the movie has rivetting moments. Did Zuckerberg plant an animal cruelty story about Saverin (Garfield)? Did he sabotage Napster’s Shawn Parker (Timberlake) using a cocaine party story? You mean the youngest billionaire in the world is a lowdown skunk? That is so amazing.