The Man with a Ferocious Impulse

Legendary filmmaker Werner Herzog on why 3D leaves him cold, the frictions of filming and why he doesn’t care about his legacy 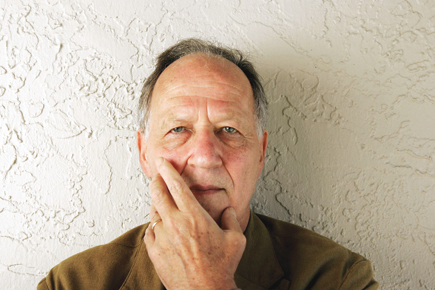 Legendary filmmaker Werner Herzog on why 3D leaves him cold, the frictions of filming and why he doesn’t care about his legacy


Vanity Fair magazine labelled him the most interesting man on the planet. His muse and leading man, the late Klaus Kinski, called him ‘malevolent, avaricious, sadistic, treacherous.’ But in person, legendary German director Werner Herzog was gracious.  At the International Film Festival of Kerala, where he was given the lifetime achievement award, he spoke about his ferocious reputation and his uncompromised cinema.

Q You said in an interview that the profession of film making has destroyed almost everyone. You can be a cello player till the age of 95, you can be a poet until you die, but the lifespan of a filmmaker is 15 years, then you crumble into ashes. But you don’t look like you are crumbling into ashes at all.  How are you beating this?

A (laughs) Well, I am surprised, this is against my predictions. It is a statistical fact that filmmakers do not have a very long working life. What exactly it is that leaves so many men and so many women as ashes after a fairly short period of time, I do not really know. But, of course, we have had cases like Bergman, Kurosawa or Bunuel. Bunuel in particular, who went from the 1930s surrealist films and then to Mexico and then back to France and back to Spain. So he had not only a very long span of working life, he also went through very different phases of style and of focus. But these cases are rare.

Q What is your secret?

A I don’t know what it is. I am mystified that I am still around. And strangely enough, I work almost more now than when I was young.  I have made over 60 films, and now until next August I have to deliver five films. So I have already made two films this year and three films last year. But I am not frantically working. I am working steadily and quietly. It’s not that I am a workaholic. I just work steadily and focused and fast.

Q David Fincher once said that he didn’t care about movies that entertain. He said: “I am most interested in movies that scar;  the thing I love about Jaws is the fact that I’ve never gone swimming in the ocean again.” What do you want your cinema to do? Do you want it to entertain, to educate, to scar?

A That is a hard question to answer. Number one, I personally do not see many films, maybe two or three a year.

Q Really? Why is that?

A I don’t know. I read much more. So I am somebody who reads. And I do not really ask myself this question.  I just do what I think is my duty to do, and I follow the most ferocious sort of impulse for a new project, because while we are sitting here, there are five or six feature films pushing at me and three or four documentaries pushing at me. So I try just to cope with it and keep abreast with all this home invasion.

Q  So it’s whatever grabs you?

A No, I do not know exactly what it is, but I think people have experienced moments of home invasion.  All of a sudden your house is full of uninvited guests, and it’s always like this.  I have half a dozen uninvited movies that come into my…

A No, they come through the door, through the window, through the chimney, through the cracks in the walls—and whichever is pushing me hardest,  I try to cope with that one next. So I never could keep abreast of what I was doing. And I don’t ask myself too many questions of ‘Do we have to educate?’ No, not really. For education, you’d better go to school. And for information, you’d better read the newspapers. And for entertainment. Sure, a good amount of cinema is entertainment, but there are other deeper qualities in cinema that I am after. But of course, if you tell a story that doesn’t captivate the fantasy of many people, you are immediately doomed. So you have to come up with a good story.

Q You have to engage?

A Well, you have to be a good storyteller.

Q In his autobiography, Klaus Kinski said that you are driven by a ‘pathological addiction to sensationalism.’ Do you agree?

A No, the biography of Kinski you have to see as a completely invented piece. It’s a life that he wished for himself, but of course it was mostly invented. He described his childhood as being impoverished and fighting with rats on the floor over the last breadcrumbs. In fact, his brothers explained to the general public, he grew up in a well-to-do pharmacist’s house. And of course he could never accept that anyone could direct him, so he would throw wild, wild invectives, heap them on me. He was not that good in English. So I bought the Oxford English Dictionary and I helped him find wild expressions against me. And, in a way, we conspired sometimes.

Q But your films, each one has been like going to war. The stories of how they were made are almost as legendary as the films themselves. Why are you constantly driven to these extreme situations?

A Well, if you are doing a film with Kinski, you have to accept a wild situation and turmoil.

Q That’s a given?

A It’s a given. Yes. He was the craziest of all, the wildest of all,  the most volcanic of all. But of course, you are looking back at films that I made 40 years ago.  There has always been for Kinski a life outside of Herzog. He actually made 205 films in his career, and only five of them with me. And I made something like 60 films and only five with him. And of course, I have always been out for new horizons. I have worked with Nicolas Cage recently and Christian Bale and some of the finest actors that are around today. So the voyage has gone on, and I find it difficult to look back at all this turmoil that I have had. And the turmoil recently. I have been shot at, which is okay.

Q Yes, I read that you were shot at in Los Angeles while doing a BBC interview.  But the process of making films doesn’t seem to have become easier.  Reports from the sets of Rescue Dawn were fairly intense.

A Yes. The problem in this case was that all of a sudden 35 crew members left the sets because they had not been paid. For example, the transport department was not paid and there wasn’t even enough money for gasoline. So how do you get your crew and your actors from the hotel on the set ten miles in the jungle? So I had to organise these things. Yes, of course, there are frictions. But so what? It happens when you do films. It’s not like building a car, where every single piece is in order. In this special position, you have to be the lion-tamer of the unforeseeable.

Q But you have almost died making your movies.

A Sometimes, yes, but so what?

Q What drives you?

Q In the documentary Grizzly Man, you say in the voiceover that I believe the common character of the universe is not harmony, but hostility, chaos and murder. Has your worldview become more pessimistic over the years or do you see hope?

A Of course I see hope, but you have to see this statement in the commentary in the context of the film. Because the protagonist of the film, who was trying to protect bears, was eaten by a bear, together with his girlfriend, which should never have happened. And of course, it is a statement against a man who saw wild nature with the eyes of Walt Disney—in a totally sentimentalised way.  I differ with Timothy Treadwell, who was this bear protector. Wild nature in my opinion is chaos, hostility and murder.

Q Your last film Cave of Forgotten Dreams was in 3D. Are you excited by the technology? Do you see yourself doing more work in 3D?

A Not really. I have a certain scepticism about 3D. It will not happen, let’s say, like television and black & white, which is completely replaced by colour television. 3D will not take over completely, because in 3D everything that you see is like fireworks, there’s nothing beyond it. There is nothing beyond Avatar. As stunning as the film is, there is no fantasy beyond it. But when you look at a romantic comedy, for example, we as an audience develop a parallel second story, an inner story, which takes place within the audience. Will the two lovers find each other after all the obstacles and dramas? Please destiny, let them unite—so there is a parallel story, which we are developing. And we cannot develop a parallel story in a 3D film. You can’t project beyond the three dimensions, strangely enough. So you can do Avatar in 3D, but you can’t do a romantic comedy in 3D.

Q You once famously said, “Posterity can kiss my ass.”

A Well, you should be careful with such statements.

Q But as you age, do you find yourself thinking about your legacy? What do you want to be remembered for?

A Because I am not going to be around anymore (laughs).  I have always considered films like a mother would consider children. You have to let them go from a certain moment on. They have to mature, they have to start their own life. And of course, when I am dead, some of these children are still walking around the world somewhere. But it’s their business then.

Q And you are done with it?