Overstretched, boring and a little too pretentious, this Imtiaz Ali film is a letdown 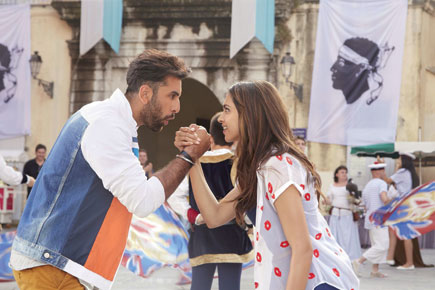 There exist multiple identities in Tamasha and maybe that is what director Imtiaz Ali is getting at in his narrative. At the start of the story, the romantic couple are ‘Don’ and ‘Mona Darling’, a reference to the other self of the middle-class Indian, the one immersed in the tinted universe of movies. The duo meet on the island of Corsica, the birthplace of Napoleon, and decide to play these characters instead of their real selves. Later, the couple are back in India as who they are, Ved and Tara, upwardly mobile urban professionals in the daily corporate grind. Towards the end of the film, separated and unhappy, they assume their fictional identities again.

The dividing line between fiction and reality in Hindi cinema being what it is, a third set of identities cannot be ignored. The boy and girl are also Ranbir Kapoor and Deepika Padukone, one-time lovers and now friends, who continue to display a terrific screen chemistry. This gives Tamasha its zing and makes it tolerable watching.

Clearly, the film is also tailor-made for a bravura performance from Ranbir as the boy from Shimla who was forced by parental pressure to live the professional life he hates. He would much rather have been a storyteller, an actor, a clown—like the character from Mera Naam Joker (1970), sad within and an entertainer on the outside. Putting this mask on, Ranbir demonstrates the personae and style of three generations of his family, and it is touching.

Unfortunately, it also gets quite dull. Imitiaz Ali has always been a very honest filmmaker, true to his subject, but, for the first time, one sees a touch of pretentiousness creeping in. Highway was an evocative film about the search for identity, but not this. Tamasha is about a search for middle-class comfort zones, not a place for the soul.

The film has an unconventional structure, but the content is placid and the narrative too stretched out.