With a shocker of a villain, this sequel barely matches the dynamism of Singham 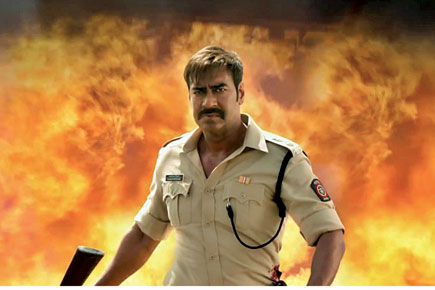 With a shocker of a villain, this sequel barely matches the dynamism of Singham

The original Singham was a cop and goonda movie designed to be a little out of the box. It got a forthright police officer posted in the backwaters of the Maharastra-Goa border to realise that with the nexus between politicians and goons being what it is, the only alternative for effective law enforcement was to function, for short periods of time, outside the system. So inspector Bajirao Singham (Ajay Devgan) inspired the entire police force to unite, take off their uniforms, fix things forcefully, put their uniforms back on, and then present a fait accompli to the political system. The film was loud and dramatic, but it worked.

In Singham Returns, the same proud Maratha officer is posted in Mumbai—a fish out of water. No matter. Warrior bugles play intermittently while he slaps the denizens of this city around and shouts instructions to his men in chaste Marathi. His love interest earlier was a somewhat rustic lady called Kavya Bhosle. But since being transferred to Mumbai, he has moved a little upmarket and his new girlfriend is called Avni (Kareena Kapoor Khan). Her major interest in life, apart from coquettish intimations about a possible marriage plan, is food. But the real shocker is the villain. He is an evil Godman, simply called Guruji (Amole Gupte). He is the clown in this movie, clearly taking off on the characteristics of the Godman, Asaram Bapu. In one scene, Singham marches Guruji on the streets of Mumbai to the High Court, much like the familiar images of Asaram Bapu being escorted to prison.

This is precisely why this sequel does not work at all. For an inspector in the countryside to inspire an insurrection of the police force when faced with complete lawlessness in Mumbai, you need an antagonist more threatening than a comical Godman. The choice of villain has knocked the sails out of Singham Returns.