Traditional filmmakers think digital cinema looks cheap. But with evolving technology, can they tell the difference between film and digital anymore? 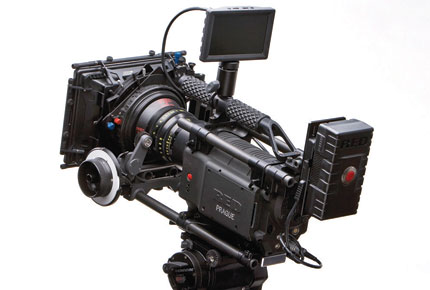 Traditional filmmakers think digital cinema looks cheap. But with evolving technology, can they tell the difference between film and digital anymore?


The hottest digital camera doing the rounds in the Chennai film industry is the RedOne. Not in its physical presence (there are only a few who own it so far) as much as in its mythical presence. Two years ago, when I was in film school, my cinematography classmate stormed in with news. He had seen God. And no, God was not male. Or Caucasian. God was in the details.

Brilliant high definition test footage shot by Peter Jackson using the RedOne digital camera had just been put up on the Net. Gaping with open-mouth wonder, we huddled around the laptop. The ‘film’ was not much. It was a short piece titled Crossing the Line, a war scene that packed a wallop with its stirring action. But more important to us was its ‘sexy’ resolution. ‘Natasha’ had shot these splendid images. No, Natasha was not some femme fatale cinematographer. That was the name of the prototype Red digital camera used in the shoot. The download site had a clever disclaimer: ‘This video is only 1/4th the resolution, so you’ll probably only be 1/4th as impressed.’

Over the next two years, there was quick evolution. Digital cinema climbed closer in its seemingly endless march up the Himalayan peak of ‘film’ image quality. Film has a resolution ranging from 6K to 9K, compared to the 2K being offered by Red at the time. Soon 4K and 5K models were available. It was no secret that digital cameras brought down film production costs. But filmmakers resisted, saying it was cheap and it showed. But things soon changed.

Slumdog Millionaire became the biggest success story for seamlessly merging footage shot on Silicon Imaging 2K digital Camera (SI-2K) and traditional film stock. It is anyone’s guess which scene was shot on digital and which on film. The movie won an Oscar for Best Cinematography. Mel Gibson’s Apocalypto was shot fully on Panavision Genesis (another high end 2K digital camera). Sin City, Once Upon a Time in Mexico, Angels  & Demons all used high definition digital cameras.

And now, it has arrived in India. Acchamundu Acchamundu, India’s first RedOne film and one of two Tamil films selected for the Indian Panorama at the International Film Festival of India, was shot in New Jersey by Tamil NRI director Arun Vaidyanathan. He says, “We tested RedOne almost a year ago. We considered it over Panavision Genesis, similar in features but mighty expensive. A film camera costs around Rs 1.3 crore, compared to Rs 25 lakh for RedOne. Footage is recorded on hard disks so there are no film processing and developing costs. ”

So is film dead? “No way. It all boils down to the kind of movie one wants to make,” he is quick to retort. “If I am making an intimate family drama, shot largely indoors, I would go for a digital medium. If I have to shoot a fantasy sci-fi epic, I might need the grandeur and density of film stock.”  Long live the King. The King is not dead. There is no doubting though that the prince has arrived.

RS Prasanna is a filmmaker based in Mumbai