Prakash Jha’s latest is loud, uncouth and rather an awful film 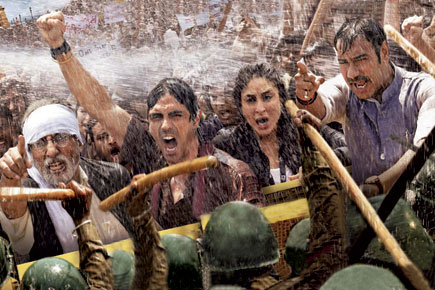 Prakash Jha’s latest is loud, uncouth and rather an awful film


This is a movie in very poor taste. Fortunately, most people in India have a more evolved understanding of satyagraha than does director Prakash Jha. He just throws a spanner into the works—corruption in contemporary India—and comes up with a cartoon ‘Gandhi’, a school teacher called Dwarka Anand (Amitabh Bachchan) who starts civil disobedience by giving a government officer a tight slap.

This is apparently an ‘updated’ interpretation of Bapuji’s message to the nation, modern Gandhi avatars having voiced their approval of the occasional wake-up slap to government representatives. In this film, Dwarka Anand is called ‘Daduji’ and he goes on fasts unto death and leans on two young girls for support. But unlike the Gandhi of Lage Raho Munna Bhai, who always turned the other cheek in his effort to reform public officials, this one is a bit of a Left-leaning rabble-rouser.

Jha lost his ideological mooring long ago, but at least the politics in his films could once be debated. With Satyagraha, even that is not possible. It is a loud and uncouth film, straight out of a discussion aired on any Indian news channel.

There is Manav (Ajay Devgn), a successful corporate tycoon from ‘shining’ India who once exploited his shareholders, but has since reformed and been swayed by Daduji’s movement. His girlfriend is Yasmin (Kareena Kapoor), a TV reporter who highlights the agenda and, more relevantly, Manav’s role in it. Together they fight the sleazeballs of the country, championed by a murderous politician (Manoj Bajpai).

The film is visually designed like primetime TV news, mostly on sets, with little location shooting and with tweets from ‘Public Opinion’ displayed prominently on screen. When ‘Daduji’ looks weak from his fast, sympathy ‘tweets’ are highlighted, and had the film’s decibel level not been so high, you might actually laugh. In short, this is a pretty awful movie.