It is a Rajinikanth film. That’s all that you need to know about this movie, wokay! 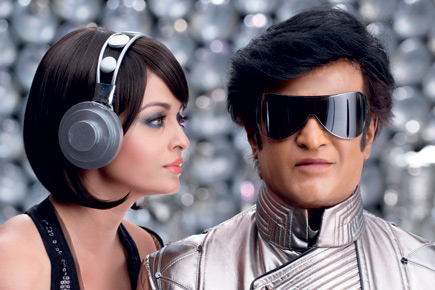 It is a Rajinikanth film. That’s all that you need to know about this movie, wokay!


This is a science fiction film with a movie star whose meteoric rise and transcendent status is outside the realm of scientific explanation. If you remove Rajinikanth from the equation, Robot ends up as a movie overly dependent on ham-handedly applied computer-generated effects, and with content that is staggeringly plagiarised.

But with the superstar, mythology is the totem of pop cinema, and hoots and whistles greet Rajinikanth’s new avatar. The film is about a scientist called Dr Vaseegaran who invents a robotic version of himself and then faces scientific cross-examination on the ethical dimension of constructing a human-like machine sans human feelings.

Chitti, the humanoid, appears flesh and blood until he receives instructions from his programmer and turns into superman, which in his case is a hydra-headed, hydra-limbed, metal-constructed, battery-charged idol from the trinity of creation, preservation and destruction. When director Shankar adds music from religious ceremonies at climactic moments, it is clear that Rajinikanth, who plays both inventor and robot, is the idol being worshipped.

At one point, during a Q&A session, Chitti is asked who his God is and he points to Dr Vaseegaran. The idea of man playing God has been explored at length by Stanley Kubrick and he had handed over a film treatment to Steven Spielberg, who developed it into A.I. Artificial Intelligence, a film about a humanoid robot with the capacity to love.

In Robot, Dr Vaseegaran adds human feelings to Chitti’s programming and he falls in love with the beautiful Sana (Aishwarya Rai), his creator’s girlfriend. This and other developments extend the film to an extra hour of multiplied imagery, thousands of Chitti clones cramming the frame, like movie posters of Rajinikanth pasted end-to-end for hundreds of miles. A surreal, pointless and exhausting experience.