Revenge of the Rs 200 Ticket 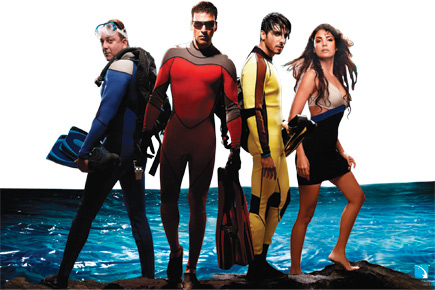 
The day Blue released, I called up Anthony D’Souza, its director, around 9 pm. We started with cliches—stock question (why an underwater movie?) got a stock answer (“I wanted to do something new, something Indians had not seen”). The cliches were moving fine until, suddenly, he slipped this one in: “I don’t care about people who watch the movie free and write whatever they want. I am only concerned with those who pay Rs 200 and buy a ticket.”

He was alluding to reviewers, especially the uncharitable ones (of whom, it turned out, there were many). I could have defended reviewers but that would be really tough. Some are in the camps of movie stars, some are friends with the filmmakers, some can be bought, some are beholden to their idea of real cinema, some read other reviewers to borrow opinion, some are blinded by compassion and are generous with handing out stars. Many are definitely honest, but it is hard to tell who are anymore.

The other option I had was to agree with him about the scourge of freeloaders but there too, I faced a slight problem. You see, at the preview the previous evening I, too, had watched the movie free.

So, the day after I spoke to him, on principle, I went to a multiplex, paid Rs 205 (including Rs 15 Internet booking charges) and watched Blue again. And, what do you know, he had a point: if you spend Rs 200, some peculiar psychology gets to work and you try your best to be reassured that the money has not gone waste. The burden of proof, so to say, is squarely on the audience. I noticed this metamorphosis within me, but, even so, though it shifted in inches and degrees, my first impression, alas, refused to change direction. As a ticket carrying member of the public, I still thought Blue had some way to go to be the adrenaline ride it promised.

Blue is set in the Bahamas and is an action-cum-treasure hunt flick, the first Indian sea-movie of such length and expense. The plot is frugal. Sanjay Dutt knows the location of a ship, Lady in Blue, which sank while returning India’s treasures after Independence. Two men—his friend, Akshay Kumar, and his brother, Zayed Khan—want the trove out.

Dutt will not oblige, bursting an artery every time it is mentioned. And there the matter would have ended if Zayed Khan did not have Rahul Dev, the villain, chasing him for $50 million because he lost a bag. Rahul Dev kidnaps Lara Dutta, Dutt’s girlfriend. So Dutt and gang are forced to go for the treasure. They locate it, villain lands up, everyone is finally in the same frame—climax, predictable twists, end and titles.

“If you come to watch Blue expecting a Fast and Furious, you will love it. If you come expecting a great script with depth, then you will have a problem. I had no illusion of being a Sanjay Leela Bhansali. I wanted to do something where the action would be mind-blowing. Which would be visually spectacular,” says D’Souza. With the moral force that comes with having seen the movie twice (and paying for the ticket once), I can opine that half his aspirations have come to fruit.

Blue is a shallow movie, with little by way of an intelligent script. To be like a professional reviewer and give the worst possible example in order to make a telling statement, I refer to one scene in which Dutt’s father takes a promise from his son to keep the treasure secret… in sign language. Then there are the attempts at infusing a cool quotient into its characters with lines like “Go Figure” (said by Zayed Khan, who was cast as wood, I think), “Grow Up Man, Just Grow Up” (Akshay Kumar on auto pilot).

It is, however, also true that the movie is a visual spectacle. It threatens to but never deteriorates into Nat Geo documentary territory (the only person disappointed on this score was a friend’s kid who forced his father to take him to the movie in Gurgaon after seeing sharks in the promos—“he came back slightly shocked” said the father). All the goggled men in yachts look handsome in the afternoon sun, the women are toned flesh burning hot. The music by AR Rahman is as usual, a given.

What pinches really is the second half of D’Souza’s bargain: the mind-blowing action. Or, the thriller tag. It is fine by Bollywood yardsticks, but then, almost anything would be. There is plenty of action. Bikes racing, bikes chasing, bikes flying onto trains, sharks leaping, shoot-outs and underwater sequences. My Rs 200 asked my heart to beat faster or at least skip a beat. But my heart could not.

Making an underwater movie is tough. According to the action director of the movie, James Bomalick, it is ten times tougher than a movie on dry land. The currents are never the way you want them and if you want 20 sharks, 30 more might decide to come along to see the shooting. It is also expensive. The PR machine of the movie has planted in the newspapers that the film cost over Rs 100 crore. But we would never know the truth. “I don’t have any idea what the budget was and Ashtavinayak (the production house) has a policy of not revealing their budget. So, I don’t know where those reports of Rs 100 and Rs 110 crore come from. In fact, one said the movie cost Rs 180 crore. I would have been so happy if that were true,” says D’Souza.

Bollywood budget figures are, of course, meant to fool people. I once knew an animation-cum-feature film which was consistently touted as a Rs 50 crore movie over the half decade that it was being made. When it bombed, one of those instrumental in quoting the number candidly said that the real figure was about one-tenth the cost that had been proclaimed. Another time, I saw a Govinda-Akshay song on a news channel with a line which said that it cost a crore to make. The media, today, accepts any figure as long as it is attractive. Nevertheless, Blue must have been an expensive film to make. Akshay Kumar does cost more than a shark.

I spoke to a few people who had seen the film. A 19-year-old college student from Pune offered to give it two and a half stars (out of five). “Change it to 3 stars, if you are a bike lover,” he told me, and went on to share this interesting theory that Akshay Kumar has had so many awful movies that if he now figures in a half-decent film, it will sell. Another Blue watcher, largely influenced by Lara Dutta in a bikini, thought he enjoyed it better than Kaminey. The third said, “Theek hai. Something different.” These were multiplex people, who see better and bigger Hollywood films. I put it down to the Rs 200 syndrome.

Hollywood has been D’Souza’s inspiration. But if he had to make the movie all over again, he says that he would try to get some Bollywood into it.

“And what do you mean by Bollywood?” I asked him.

“Well, you know,” he said. “We love emotions. I would add some depth and drama.”