Satya Bhabha plays the Bombay boy in Midnight’s Children, though he has never lived in India. What helped was one long chat with Salman Rushdie 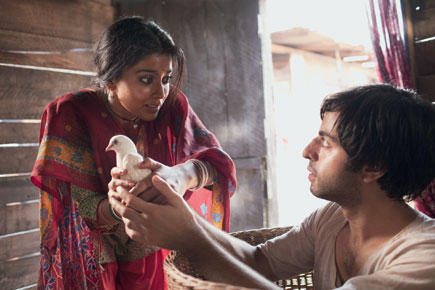 Satya Bhabha plays the Bombay boy in Midnight’s Children, though he has never lived in India. What helped was one long chat with Salman Rushdie


For Deepa Mehta, the burden of adapting Salman Rushdie’s 31-year-old Booker Prize-winning epic novel, Midnight’s Children, could not have been an easy one to bear. For one, she had to condense into a two-and-a-half hour movie a stunning narrative that sprawls through the length of much of India’s cultural history and identity, with just as many digressions from the main story itself, as it has named characters (as many as 100, at last count).

It also couldn’t have helped that there were many before her who had tried their hand at adapting the book and failed, on account of fundamentalist elements. Yet, none of these challenges would have seemed surmountable had Mehta not found the perfect actor to embody the novel’s heart and soul, its protagonist and narrator Saleem Sinai, and to share this burden with her.

At first, there were rumours that Ranbir Kapoor and Shahid Kapoor were in the running for the coveted part of the young man who finds himself ‘handcuffed to history’, and whose life, struggles and experiences mirror those of free India. At one point, there was news that Imran Khan would make his Hollywood debut with this role. But ultimately, the duties of playing the unlikeliest of heroes ever to be found in Indian fiction went to an unlikely American actor of Indian origin.

London-born Satya Bhabha, who until now was best known for playing Matthew Patel, the first of seven evil exes in Edgar Wright’s comic-book adaptation, Scott Pilgrim vs. The World, did not see it coming. “I was honestly not vying for the part,” says Satya over the telephone from Los Angeles, his current base, from where he has been travelling to promote the movie at prestigious film festivals all over the world, including the recently concluded Toronto International Film Festival.

“I had met Deepa in Toronto in 2009, long before the project was even moving. We never got into any specifics and I didn’t hear from her for quite some time after that. And then, months later, she invited me for the screening of a movie in New York on Thanksgiving, and unexpectedly, announced to the audience there that I would be playing Saleem!”

Satya admits that for him bagging the lead was a mix of “shock and elation”, especially considering that it’s been a constant struggle for him to find meaty roles in an industry where there aren’t many parts written for Indian actors. A few comic talents like Aziz Ansari (Parks and Recreation), Mindy Kaling (The Office) and Kal Penn (Harold & Kumar series) have certainly started opening up perceptions of what Indian actors can do, but these examples are few and far in between, and in the majority of films, actors like Irrfan Khan (The Amazing Spiderman) and Anupam Kher (the upcoming Silver Linings Playbook) have to be content playing strong supporting characters.

Having grown up in London and having studied theatre at Yale, Satya says he wasn’t necessarily aware that as an Indian, it would be challenging for him to find work in a professional context. “I never felt the presence of racism until I moved to New York and started auditioning for roles,” he reveals. “The limitation in the thinking of casting directors was quite irritating at times because they don’t think you can play a relatable American student because of the fear that your name sounds a certain way or you look a certain way.”

But he insists that this has never deterred him from trying, over and over again. Because not only does he believe there will be change—and that it has started on a small scale already—but somewhere, as he grows, he also wants to bring it about.

One of the major reasons he has managed to stay determined is thanks to his parents, and the fact that he doesn’t belong to a “traditional Indian family setup”. “I never faced any opposition to my offbeat career choice that children in India face, because my father, who is Indian, is neither a doctor nor an engineer,” Satya says, “He is an academic and both he and my mother, who is of German heritage, have always supported me, even though I realise that in a profession like acting, where you are out of work so much that you are just grateful to have a job, it is doubly difficult for the parents than it is for the kids.”

While these are issues he’d have to work at overcoming for much of the discernible future, it was living up to the enormous expectations of readers the world over that had Satya apprehensive and “very scared” for the last couple of years. Because where Saleem Sinai is a quintessential Indian boy representative of ‘Bombay’ and India itself, Satya had never even lived in India.

“In the British schools I studied, unsurprisingly, they don’t teach you a whole lot about India and the Partition,” he laughs. “So there was a lot of work to be done, right from learning technical things like the accent and dialect to bigger things like studying the history of the country. I wanted to do justice to Saleem, physically and spiritually, and didn’t stop preparing myself until I felt a sense of ownership over him.”

As part of his preparations, Satya stayed quite a few months in Mumbai, and observed the body language of both the people and the city. He was also helped, along the way, by the author of the original work of art, Salman Rushdie, with whom he only had one initial, “extensive” meeting.

“We spoke about the character and the process of adaptation, but we really connected only when we started talking about family,” Satya chuckles. “I come from the Parsi community, which is filled with eccentric and wonderful characters. Salman, although he is from a different community, has many such characters in his family too, and that’s reflected in the book. It helped me realise that I was more similar to Saleem than I had imagined. Salman really is an incredibly generous person and I still find it hard to believe that I’ve worked on the first movie he’s ever written and produced.”

For the most part of the interview, Satya is just as excited and wide-eyed at having received the “incredible opportunity to play every moment and every range of emotion in a man’s life”, and the only time his earnest and polite tone changes is when he’s asked about the controversies that have plagued the film. A major chunk of the book, leading up to the climax, is set in the time of the Indira Gandhi-declared Emergency, and makes a strong political statement. For fear of a backlash, Deepa had to shoot the film in Sri Lanka, instead of India, and even with these measures, the cast and crew dealt with minor hiccups when Iran asked the Sri Lankan government to withdraw permission for the film.

More recently, the film is facing difficulties in finding a distributor in India, and Satya admits that he fails to understand why. “The book is available on every street-side bookshop, every bookseller and vendor, so the idea that the book is allowed but the film wouldn’t be allowed is strange to me,” he says. “Ultimately, the politics is only a small part of it, and the movie is really a warm-hearted, Amelie story and talks about the importance of family and community, which no people understand better than Indians.”

“Yes, the film was made not just for India but for a worldwide market,” he adds, “but having said that, it would mean so much to all of us in the cast and crew if the film released in India.”

The film, meanwhile, has found US distribution already, and is likely to release there in theatres sometime in April next year. And while Satya eagerly awaits reactions of the mass audience and his next acting assignment that would be a worthy follow-up to, and “as rewarding as” Midnight’s Children, the 28-year-old has already graduated to direction. In the midst of post-production of his first short film, Satya says he is developing a full-fledged feature film next “that is based on a famous short play”, and if all goes according to plan, it will go on the floors sometime next year.

As for Indian cinema, he is “definitely interested.” “The new wave of cinema in India, led by Anurag Kashyap, Ronnie Screwvala and Aamir Khan Productions, is very exciting. I love Omkara, Maqbool, Love Sex Aur Dhokha, and Oye Lucky! Lucky Oye!. I’m a huge fan of Dibakar Banerjee, and if I get the chance, I would love to work with him someday.”

He is not opposed to commercial, mainstream Bollywood. “I want to try everything out once, maybe twice. I can definitely dance, and if they are okay with giving me work after they’ve heard me sing, I’d love to do their movies!” he laughs.

Midnight’s Children is facing difficulties in finding a distributor in India, and Satya fails to understand why “the book is allowed but the film wouldn’t be”