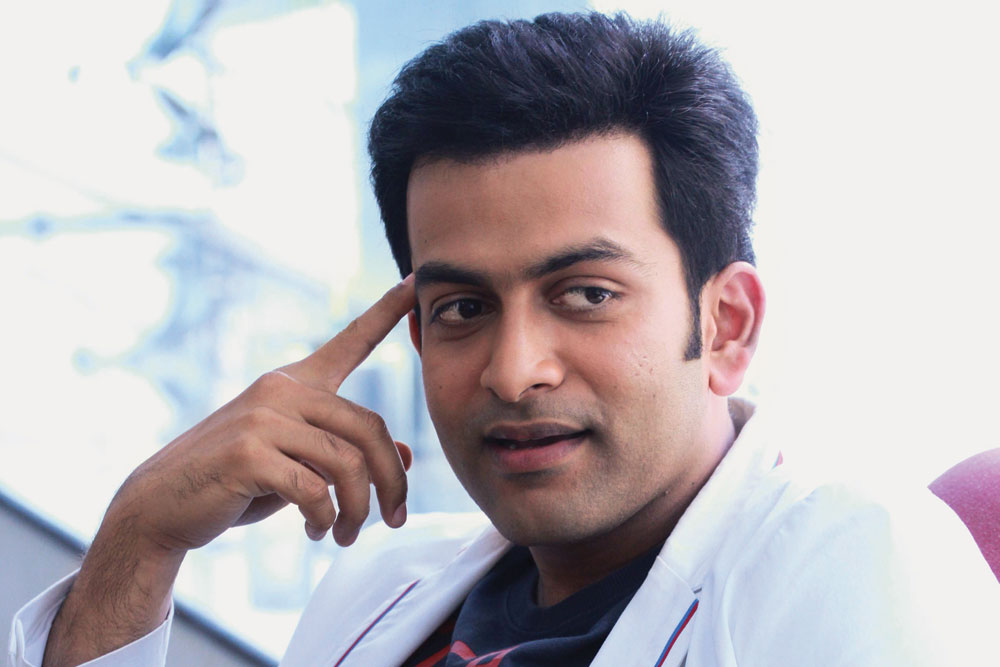 
ONE MINUTE HE is staring into his blindfolded co-star’s face, smoulder­ing as he leans in for a kiss in Bhramam (2021). Another moment, he is examin­ing a skull in Cold Case (2021). And at yet another moment, in Kuruthi (2021), he is staring into nothingness, bathed in the solitude of the forest, tears falling down his face. At 38, Prithviraj Sukumaran is already a veteran of Malayalam cinema, having acted in over 110 films, but for the rest of the world, he is one of the most exciting actors they’ve recently discovered, along with Malayalam cinema in a pandemic reality.

And much of it is because of his 2019 directori­al debut Lucifer, a magnificent movie he directed with his idol Mohanlal, and whose airing on the streaming platform Amazon Prime Video start­ed a partnership that has showcased Malayalam cinema beyond Kerala. Much like the change in the Malayalam film industry in 2010, when satellite rights exploded, taking the fee for each Malayalam movie from `35-40 lakh to `3.5-4 crore (now upwards of `10 crore), 2020 showed a way out of the narrative block. Go back to the roots, go back to good writing, go back to the fine team of technicians that enabled good stories to be executed quickly and brilliantly. Make the films character-oriented and subject-driven. Having begun in another age altogether where the story was subservient to the formula and the actor was secondary to the star, Prithviraj has straddled both eras with ease.

The University of Tasmania graduate in information technology, son of two actors (Mal­lika and the late Sukumaran), brother of another (Indrajith) and brother-in-law of yet another (Poornima Indrajith), Prithviraj began in 2002 when a Malayalam movie would be shot in 30 days and the hero would be required to work for a maximum of 18-20 days. Despite days when he wondered what he was doing on the sets, he sol­diered on, with movie-making finally catching up with his ability to totally immerse himself in the character. From the perfumed sex god of Aiyyaa (2012) to the steely closeted gay inspector of Mumbai Police (2013), from the Malayalam cinema pioneer, JC Daniel in the biopic Celluloid (2013) to the sensitive brother of Koode (2018), Prithviraj’s brilliance has been uncontested, but perhaps not celebrated adequately.

As Anjali Menon, the Koode director says; “Prithviraj has had an uphill journey in the industry, one that most people wouldn’t survive. But as a result, he has developed a 360 degree un­derstanding of the medium and that has helped him take up multiple roles as actor, director, and producer. As an actor, Prithvi is comfortable and willing to take risks with directors he trusts and that is when his most memorable performances emerge, I am excited to see him reinvent himself every time and would love to see him explore his vulnerable side more.”


“Things in Malayalam cinema are so good that one really needs a very good film in Hindi to make it worth one’s while,” says Prithviraj Sukumaran, actor

Prithviraj is a huge be­liever in studying the script. “I not only know my own dialogue but those of my co-actors as well,” he jokes, sitting in the TV room of his Kochi apartment, surrounded by caricatures of some of the characters he has played and which the illustrator of Driving Licence (2019) used for his character of a star in the movie. “Once I read the script, I make a chart in the mind for the character from point A to Z but the film probably captures the character only from M to Q,” says Prithviraj. This helps him especially as films are not often shot chronologically. “But as an actor, you have your own imagination on what the character could be outside the film,” he says.

He loves living with these imaginary char­acters and says the best films are those which are shot at one go. “It cultivates a team culture,” he says, and everybody is then in the brew. “I enjoy working like that,” he adds, “I’d still be doing this if I wasn’t paid a penny and I am paid more than a penny.”

He doesn’t take too many breaks. At the most, he takes a week off before immersing himself in the pre-production of the next film. “I often visit the sets under construction or sit in on the recording of the next film’s music. It helps me erase my pre­vious character.” Once the film is completed there is absolute detachment. “I won’t be painting the town red if my film does well nor will I be wallowing in misery if it doesn’t,” he says. It is just onwards and upwards.

Mohanlal aka Lalettan is his idol in his career but more so in life. They live in the same apartment building in Kochi and he has observed him closely. “He has this amazing ability to live each moment as it is. I have never met anyone more in love with life than he is. The thing about the two M’s [Mohanlal and Mammootty] is they keep their social life to themselves and the assumptions of who they might be are so wrong. More than the actor, Lalettan is awe-inspiring to me as an actor. I want that part of him in me, that spiritual quality in him,” he says. His understanding as an actor is also very different, he points out. He catches you by surprise, he says, and if you ask for a second take, he cannot repeat himself.

Prithviraj has directed Mohanlal twice now, in Lucifer and in the forthcoming Bro Daddy, which also features his mother Mallika, which will release later this year. Mohanlal has directed Prithviraj in Barroz: Guardian of D’Gama’s Treasure, to be released in 2022.

The volume of work he does in Malayalam cinema keeps Prithviraj busy but a lot of opportunities have come his way from Bollywood too—where he has done three films, Aiyyaa, Aurangzeb (2013) and Naam Shabana (2017). As he says: “Things in Malayalam cinema are so good that one really needs a very good film in Hindi to make it worth one’s while.” He’s been reading and listening to some “fantastic series” from Bolly­wood though, including some cult classics that have aired on Amazon Prime. “I’ve seen some of those and wished that I’d done them. But I’ve just listened to the idea for another stream­ing show that Yash Rash Films is producing. I don’t know if I can find time for it but I love the way Adi [Aditya Chopra, chairman of Yash Raj Films] operates. I love his vision.”

Yet Bollywood comes with its set of problems. “Why does it have to be so big?” Which is one reason he enjoys Malayalam cinema so much. “It is a pacifying reminder that filmmaking is not as complicated as it seems.” Neither is acting for him. “Acting is so deeply spiri­tual,” he says. “You have to open yourself up to deepest of your vulnerabilities. I cannot cry in real life but when I am as­sociated with my character and submit myself to it, it just happens.”

“Acting is so deeply spiritual. You have to open yourself up to the deepest of your vulnerabilities,” says Prithviraj Sukumaran

Ravi K Chandran, the cinematog­rapher who directed him in Bhramam calls him the next-generation super­star. He says, “Prithviraj can direct, sing, write, act, choreograph stunts, he can do multiple things and he is one of the most experienced actors in the industry though he is not old. He’s done a variety of roles so his judgement of script is enduring.”

Which is why his filmography is studded with risky movies. He is unafraid of exploring his sexuality on screen, whether it is the assertively heterosexual object of Rani Mukerji’s affections in Aiyyaa or the deeply complex gay and aggressively masculine police officer in Mumbai Police. Nor is he afraid of being wick­ed or playful—he explores both aspects in Bhramam, where his Ray is far edgier than Ayushmann Khurrana’s Akash in the original Sriram Raghavan movie, Andhadhun (2018).

Like actors Fahadh Faasil and Tovino Thomas, he is in the vanguard of high-quality Malayalam cinema taking centre-stage. Prithviraj’s hope is to export Kerala’s movies to the rest of the world and traverse boundaries across the globe. “We want the world to sit up and take notice,” he says. It’s already doing so.