With no redeeming sub-plots, supporting actors, catchy songs or memorable dialogues, this Rajshri film is a disgrace to its kind 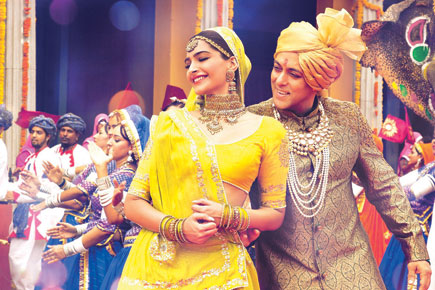 The fairy tale principle of cinema is based on the notion that miracles are a routine part of everyday existence. In the miracle genre, if two people from two completely different backgrounds look exactly alike, there is no need to get into a convoluted explanation of how they could be identical twins separated at birth. The Sooraj Barjatya formula gives it to you straight: the Prince and the Pauper look alike, take it or leave it. One is played by a mustachioed Salman Khan and the other by a clean shaven one. The directions are clear, so just follow the arrow.

Disbelief is not merely suspended in Barjatya’s Prem Ratan Dhan Payo, it is simply eradicated. Vijay Singh, the ‘Yuvraj’ of Pritampur, is riding his royal carriage when he falls off a cliff to what should have been a certain death, a few thousand feet below. But, lo and behold, he is revived by a family doctor, and by the end of the film, is sauntering around his kingdom without a scratch. The only problem is that his minder, the Diwan Sahib (Anupam Kher), has the tricky business of keeping his fiancé, Princess Maithili (Sonam Kapoor), in the dark till the Prince’s bandages come off.

Enter Prem Dilwale, actor and musician. He looks the carbon copy of the Prince, but in personality is the polar opposite. He woos the Princess, surprises her with his lack of inhibitions and gets her to unwind. He is also a networker par excellence and manages to heal some of the fractures in the Pritampur Royal family. By the time the Prince is back from his convalescence, Dilwale has done some major mending of hearts and minds.

Unfortunately, PRDP, to give the film its acronym, is without any conflict—political, social or romantic. While this principle of harmony is part of the Barjatya fantasy of the extended Indian family—a romantic idea of the idyllic that he has been able to successfully sell since Hum Aapke Hain Kaun—there are quite a few things missing in this film.

The absence of sub-plots with a wide variety of minor characters playing entertaining if clichéd parts, is the striking difference here. Apart from Deepak Dobriyal who plays Dilwale’s goofy friend, Kanhaiya, there is no supporting actor to provide comic relief. In earlier films of the Rajshri production house, a whole host of popular actors would fill the gaps by diverting us with sub-plots, should the central plot begin to flag somewhere.

Another let-down is the absence of memorable songs, the mainstay of this kind of cinema. While the music is pleasant enough, the catchy song that you find youself humming as you walk out of the theatre is not there. This keeps the movie from developing an identity of its own.

The lead actors, then, are left without any crutches to lean on. They have no dramatic conflict to overcome, they utter not a single memorable line, and their individual personalities are just not strong enough to sustain nearly three hours of viewing.

The only thing you are left with in PRDP are the exotic sets and the colourful costumes. The impact of this admirable mounting lasts for about half an hour. After that, it becomes an overdose.

In other words, this is a highly disappointing Diwali movie.