With an overload of scatological humour, this film does not offer much by way of a story 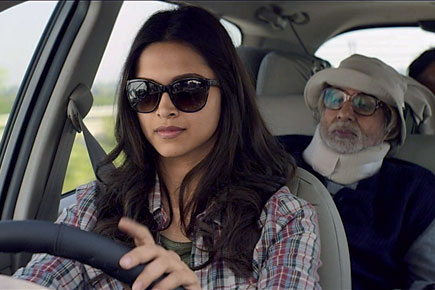 Should you want your mind to be broadened by a road movie that gives you an excremental vision of life, Piku is the one to watch. About a journey by taxi from Delhi to Kolkata, the movie is fixated on a single subject—an endless discussion on constipation. Bhaskar Banerjee (Amitabh Bachchan) suffers from a real or imaginary problem with his bowel movements and lets everyone around him know this, articulating himself in a completely fake Bengali accent and presenting us with a hideously caricatured example of Bengal’s ‘bhadralok’. He lives with his daughter, Piku Banerjee (Deepika Padukone), single and working, and her whole life now revolves around his eccentricities.

None of the drivers in the taxi service turn up on the morning of the scheduled departure of the Banerjees, so the owner of the company, Rana Chaudhary (Irrfan Khan), who has a soft spot for Piku, fills in and drives the father-daughter duo to Kolkata.

The only point of interest, once it’s done with its overdose of scatological humour, is to watch how Rana tries to break through the emotional barricade that Piku has built up over the years between romantically inclined men and herself. Irrfan’s performance is delightfully understated and expressive. There is a short scene at the onset of the journey when he refuses to start the car. He keeps glancing back and looking at Piku, till she understands that he is the owner of the cab firm and not a driver and decides to join him in a front seat. He does this with his eyes, with his offended expression, and with his appreciative look when his message finally gets across.

So Piku is a film about the Bengali family; the insecurities and un- balanced equations within; and the relationship between parents and their adult children that can be stifling. But it has hardly any story, and just one mania—if that’s the word for it.