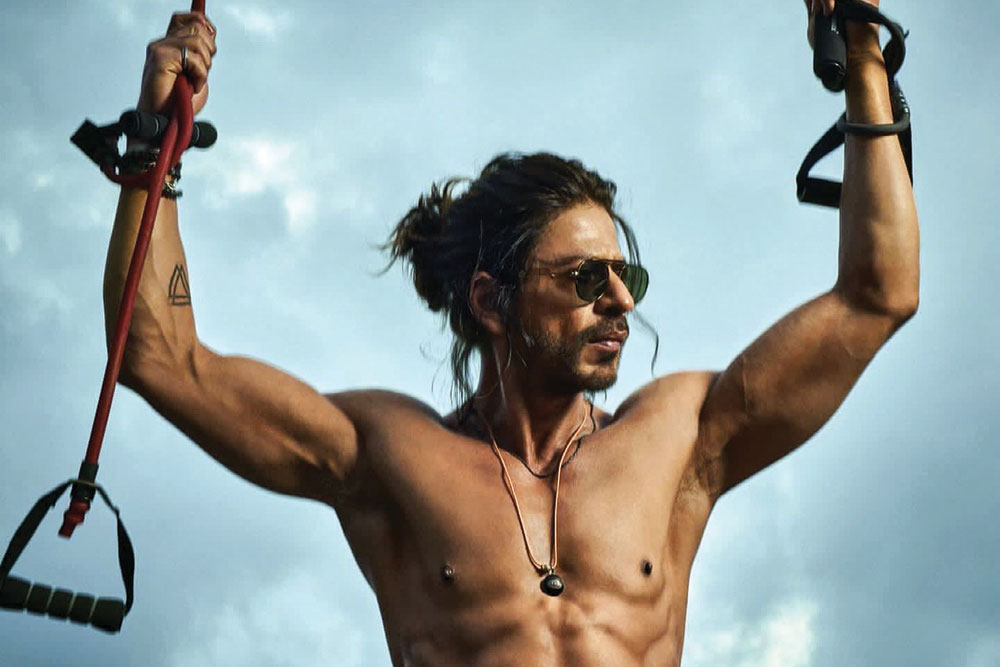 
WHERE DO AGEING superstars in Bollywood go? Twenty-three years ago, at the age of 58, Amitabh Bachchan went to Yash Raj Films after a series of flops, and officially started his innings as Mumbai film industry’s patriarch-in-chief. Now, at the age of 57, Shah Rukh Khan, bruised and battered by a se­ries of underwhelming films, gets a much-needed makeover, again from Yash Raj Films, but as patriot-in-chief. Cue the violins and play ‘Ae Mere Watan Ke Logon’, the Pradeep song made famous by Lata Mangeshkar.

In his much-awaited return to the big screen after four years, Shah Rukh Khan plays an Indian Intelligence agent known only by a mononym, Pathaan, whose job it is to save Bharat Ma. Because he is a good son, he doesn’t ask what his country can do for him but what he can do for his country. And he can do anything—fly through the air, fight atop mov­ing trains, pilot helicopters out of burning hideouts, drive fast cars on Dubai roads and ride motorbikes across freezing lakes.

He also takes time off to drape himself, shirtless, across Spanish doorways, do the tango with a Pakistani super-agent, and snarl at baddie John Abraham, playing an Indian Intelligence agent gone rogue. Pathaan is as much a movie as it is a corporate showreel for Yash Raj Films as they build a Mar­vel-type cinematic universe, even calling it the YRF Spy Universe with unabashed unoriginality. As befitting such a universe, there are Easter eggs from previous YRF spy movies everywhere, whether it is Naina’s broken ghungroos from Siddharth Anand’s War (2019) or Tiger’s love for ISI agent Zoya in Ek Tha Tiger (2012).

There are actors from previous films as well. Ashutosh Rana sur­faces in Pathaan as Colonel Luthra from War, and a cameo by Salman Khan as Tiger brings the house down. As the two superstars, playing Pathaan and Tiger, meet inside a train bogey filled with a multinational corporation of bad guys, it is with a wink and a nudge to the audience. Here you have two actors performing their stardom, moaning about their age and mileage, sharing painkillers, and discuss­ing the next generation of stars without naming anyone. Ideally, they’d like to retire after 30 long years in the business, but “desh ka sawaal hai bhai, bacchon par nahin chhod sakte hain (it’s about the nation, we can’t leave it to the kids),” they say while hanging out in the end credits.

The movie is a smartly curated assemblage of set action pieces from various Hollywood movies, but delivered with the director’s customary élan. You could argue that it is less a work of art and more a corporate showreel for a movie studio looking for expansion and an actor looking for a second innings in a sea of young men and younger bodies. You would be right. But the movie’s text is also its subtext, and so transparent is it in its wish to win audiences with maximum impact that both the director and his star can be forgiven. There are references to kintsugi, the Japanese art of repairing broken things with molten gold, and an organisation of bikhre, toote (scattered, broken) soldiers called JOCR (pronounced joker and standing for Joint Operation and Covert Research). In keeping with the diversity and inclusion card, the chief is played by a woman, Dimple Kapadia, who cutsa fine figure in her overcoats and jackets.

The plot, too, is in keeping with the politics of the times, hyper-nationalist enough to con­found the critics. The story begins with the abrogation of Article 370 in Jammu & Kashmir annoying a Pakistani general who fears India will now move to annex Pakistan-occupied Kashmir. He seeks out John Abraham’s mercenary, Jim, for help in defeating India. Jim obliges, and through a series of events, asks the Indian for Kashmir in exchange for not unleashing a mean-looking weapon. In keeping with the times, the weapon is biological.

Pathaan, who saves the day, is an orphan, someone who was abandoned in a movie theatre. He has no religion, except the belief that he must serve his country with as much love as his country raised him. Again, it is the actor performing his stardom for the establishment. Then how did you go from Laawaris, 1981, to Khuda Gawah, 1992, asks the Pakistani super-agent Rubina Mohsin, referencing Bachchan movies, when Pathaan explains the origin of his name. Turns out a mission had taken our hero to Afghanistan and he saved a vil­lage from a misdirected missile. There are quite a few pointy things that go bang and boom in the night in what is surely a measure of masculinity on display.

The dialogues are a mix of pale jokes and one-liners designed to stir one’s patriotism, written by Abbas Tyrewala. There are enough geopolitical references, as befitting a screenplay by Sridhar Raghavan, including about Pakistan’s obsession with Kashmir, India’s friendship with Russia, and India’s stand on negotiating with terrorists, but that is more window dressing and less a serious attempt at understanding the world we are living in. There is a weak attempt at suggesting that India-Pakistan love can overcome the traditional hate but it gets drowned in a few bad jokes (including one that says the ISI seems to have set itself up as a dating agency for Hindustani agents, referring to Tiger and Zoya in the Tiger franchise).


You could argue that it is less a work of art and more a corporate showreel for a movie studio looking for expansion and an actor looking for a second innings in a sea of young men and younger bodies. You would be right. But the movie’s text is also its subtext, and so transparent is it in its wish to win audiences with maximum impact that both the director and his star can be forgiven

But then it is what it is, a glossy showcase that hops across the globe using planes, trains, automo­biles, and in one case, even a pair of skates, in pursuit of VFX-aided stunts that keep the movie running along smoothly. Is it enough to resurrect Shah Rukh Khan’s big-screen stardom? His last big hit was Dilwale in 2015, and that was a failure critically. Globally, ageing actors do indeed gravitate towards becoming superheroes, and a franchise with the possibility of cross-promotion is a wonderful way of ensuring longevity. Tom Cruise is 60 and getting ready to release the first part of the seventh edition of Mission Impossible, the first version of which he released in 1996. With each edition, his stunts become even more impossible.

Technology is kind to ageing superheroes. It allows them to perform bone-crunching action and flex impressive muscles. It also erases the wear and tear of age on the body. And there is a lot of it on display here from Shah Rukh Khan, John Abraham and Deepika Padukone, whose lithe figure has always suited action more than it does dance. She gets a backstory worthy of a spinoff of her own, but this is clearly a male universe, with Tiger, Kabir (Hrithik Roshan) from War and Pathaan. One presumes Salman Khan’s Tiger 3 will see Pathaan returning the favour and Anand’s Fighter, expected to release next year, will see Kabir come back.

As a marketing strategy, Pathaan is unassailable. As a work of cinematic originality, it’s much less impressive. Think of it as a mobile museum of Bollywood waxworks that has just got a booster shot of adrenaline.