Once upon a Time in Mumbaai

This is nostalgia for a city of legendary gangsters and heroic cops. 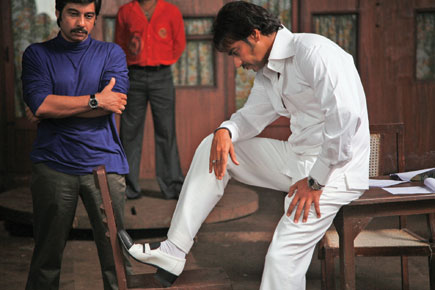 This is nostalgia for a city of legendary gangsters and heroic cops.


This is nostalgia for a city of legendary gangsters and heroic cops.

Beautifully photographed by Aseem Mishra, the movie gives you a jewel set on the Arabian Sea, a city you can barely recognise as Mumbai. Shot in the rain, with its heritage architecture washed and the ocean filtered through windswept windowpanes, it looks at the character of a metropolis on the waterfront, a town that can turn a dockworker into a celebrated kingpin of the parallel economy.

Once upon a Time… is nostalgia for a pre-liberalised India, when a chauffeur-driven Mercedes car and a spotless-white shirt marked you as a person of distinction, when the Bombay Police was the finest in the country, and when a Hindi film actress could actually speak Hindi. The film moves at a leisurely pace, structured as the narrative of a guilt-ridden police officer at the time (Randeep Hooda) who holds himself personally responsible for the creation of a monster.

Dawood Ibrahim grew up the son of a police constable and worked for Haji Mastan, just as in this movie Shoaib Khan (Emraan Hashmi) is the unruly offspring of a policeman and then becomes the tempestuous prodigy of Sultan Mirza (Ajay Devgn). Documentation ends here, and in an endeavour to romanticise law breakers, fiction and poetry is introduced. Mirza’s movie-star girlfriend, Rehana (Ranaut), wryly notes that after a few drinks the taciturn man turns into Mirza Ghalib. What is nice about Once upon a Time… is that the period ambience is not laid on too thick. Men don’t parade in silly bell bottoms, ageing hipsters are absent and Rehana has the distracted air of a diva who has strayed on to a movie set.

The problem is that the movie is too wistful about the good old days. It is strangely reticent about the blood and guts that must have been spilt for a man like Mirza to reach the heights he did, in the short time he did.

Milan LuthraOnce upon a Time in Mumbaai