Margarita, with a straw

In spite of being incredibly bold and brave, this film isn’t genuinely heart-breaking 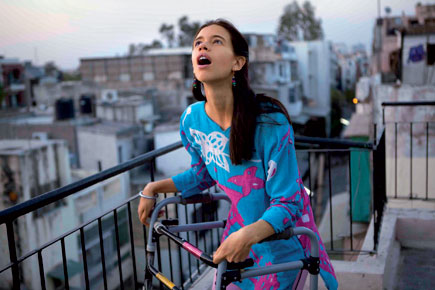 There are two women with separate and distinct disabilities in Margarita, With A Straw, but you could be forgiven for thinking that there is just one. The film focuses entirely on Laila (Kalki Koechlin), a young woman with cerebral palsy. From her college days at Delhi to the semester she spends at New York University, Laila is in a wheelchair and has a loving and deeply committed caregiver in her mother. That changes during her stay at the ‘Big Apple’ when she gets into a relationship with a blind girl called Khanum (Sayani Gupta).

It is surprising that the filmmaker pays almost no attention to the serious disability that visual impairment is. Instead, we have Khanum talk about her sexuality, about how she discovered she was gay in her early teens, and how her conservative family reacted to it. The film’s fixation is Laila and the bravura passages in Kalki Koechlin’s performance, as she gives us a virtuoso demonstration of a girl with cerebral palsy. How does Khanum find her way round New York City? Being completely blind, how does she take care of Laila’s special needs so professionally? All these questions are bypassed, to make room for breathless scenes of lovemaking between the two. The sequences are erotic and bold, true, and the statement made about the complexity of sexual orientation and the essential bisexual nature of our libido is to be appreciated. But given the personal challenges that the girls face and given an unfortunate medical situation that crops up later, the film is just too happy to be real. Emotional moments in the movie don’t surface naturally. There is a lemon squeezer at work in the script, and even in a bit of Kalki’s acting.

Still, it is undeniable that Margarita, With a Straw is a brave film that tells us that physical disability and sexual desire are two different things, neither of which can be slapped with labels like ‘normal’ or ‘abnormal’.