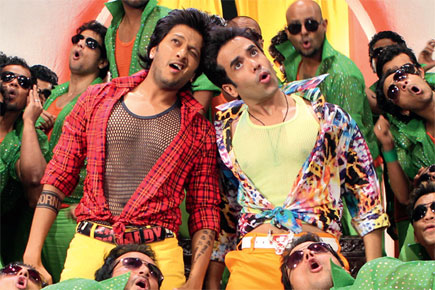 The best thing you can say about this movie is that it doesn’t really take itself very seriously. It’s about a couple of layabouts in Mumbai who room together while they focus on their passions. One guy is a DJ with an inability to pronounce the ‘sc’ syllable in ‘disc’—he’s a ‘dicks jockey’—and the other is an aspiring actor whose most significant part played is the role of a constipated man.

The film is stuffed to the gills with references to orifices and projectiles, and the task of the scriptwriters is in getting them to fit into each other at regular intervals. It starts off with the animal kingdom. Even though DJ Sid (Riteish Deshmukh) can’t make much of a breakthrough with his ‘dicks’, his pug certainly can. The dog is a stud and keeps his master’s body and soul together, earning him valuable cash by mating with bitches at the local vet.

Meanwhile, roommate Adi (Tusshar Kapoor), now typecast as constipated, is looking for a more artistically fulfilling role in director Rohit Shetty’s next film. He auditions as a mute, but the famous director laughs him off.

Disheartened, they take off for Goa. As it happens, the Mumbai girls they love (Neha Sharma and Sarah Jane Dias) are also holidaying there. Kyaa Super Kool Hain Hum hits rock bottom from here on and the ‘humour’ is a bucket of updated dirty ‘Hinglish’ jokes from daddy’s generation. In those days, they went like, “Who wrote the book, ‘Meet me round the bush’?” And the answer was: ‘Rosemary Marlowe’. Or, the book , ‘Russian Torture’, by ‘Kaikoballsquashky’.

This juvenile film takes us down the toilet bowl to the septic tank. It is so obstinately obscene, you just switch off after a while and the movie passes by in a blur of jabber. You could wake up with a hangover from PJs.