As a Muslim ready to sacrifice self and community, Saif is excellent. But is the film too convincing for comfort? 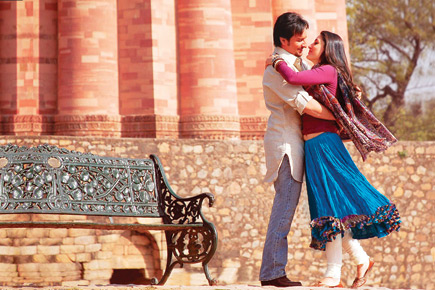 As a Muslim ready to sacrifice self and community, Saif is excellent. But is the film too convincing for comfort?


If you were a John Le Carre reader and watched New York and Kurbaan back to back, you could be forgiven for the unspeakable thought that the contents of both are propelled by the same counter-intelligence agency. One terrorist plot is vertical, up in the skyscrapers of New York, the other is horizontal and underground, in the NYC subway.

But Kurbaan is a much darker film. It’s the soul of radical religious interpretation, never mind the holes in the plot. The craters include Ehsaan, a professor of Islamic Studies from India who joins his sleeper cell in the suburbs of NYC and immediately gets a teaching position at a US university. He is a refugee from US bombing in Muslim lands and comes in on his Hindu wife’s immigration status. No background checks. Ehsaan (Saif) and his cell operate audaciously, but the FBI are out to lunch. A moderate Muslim called Riyaz (Viveik Oberoi) infiltrates the cell, but instead of calling in the FBI, turns lone ranger on this one-way street to martyrdom.

There is a conundrum here. The film is ridiculously plotted but has an excellent narrative flow. It captures truthfully the political, emotional and psychological impact of nearly a decade of war in South Asia on a group of culturally cocooned individuals who have lost touch, both with the Western nation in which they live and with the core of the faith they were born in 1,2000 miles away.

Kareena as the unsuspecting wife, coming to grips with the biggest betrayal of her life, is competent, but Saif is out of this world. He has made the transition from raw material to a skilled actor in fits and starts. In Kurbaan he disappears into the role. He is lover, murderer and man of faith, all compact. One personality.

Director Rensil D’Silva is the grim reaper and treats his subject seriously. There is no humour in the film—no window, no dialogue to the position of annihilation of self and community that the sleeper cell holds so dear. At times, with spiritual music and shots held long and close, death wish is turned into poetry. This is not a good idea.