Don’t know a word of Spanish or, for that matter, English? This will then be one tough Bollywood film for you to get. 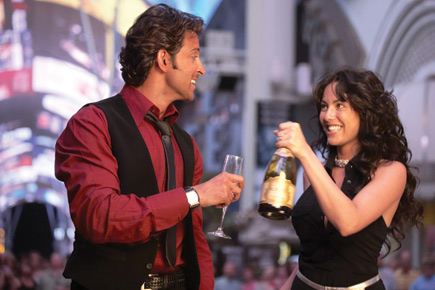 Don’t know a word of Spanish or, for that matter, English? This will then be one tough Bollywood film for you to get.


Don’t know a word of Spanish or, for that matter, English? This will then be one tough Bollywood film for you to get.

Habla Espanol? No comprende?  Then you’ll just have to race through the Hindi subtitles of this Tortilla Eastern by Anurag Basu. Because Spanish is spoken at the speed of lightning. Natasha, the Mexican girl in Kites played by Barbara Mori who shares equal screen time with J (Roshan), is voluble, has only one cute line in Hindi, and by the time we figure out what she is all about, is lost in translation. Ditto, the film. We know about launch pads for star children, but the Indian launch of  a ‘telenovela’ actress from Mexico is beyond comprehension.

Kites refers literally to kites, and how they flutter in the breeze as they approach each other like lovers, touch, then move apart, their strings held by someone else. In one of the quieter scenes in the movie, J flutters the fingers of both his hands, creating shadows on the wall, like kites in the wind, and shows Natasha how they can communicate sans language.

The rest of the film is not so touching. Kites is a badly fumbled action film that lurches from one mindless car chase sequence to another, the only explanation for the chases being the angst of  Natasha’s fiancé, Tony (Brown), a character of indefinable ethnicity and possessed of a malignity that appears compulsive. He is a Las Vegas casino operator who has no use for Natasha, but races across the US like a bat out of hell once he finds out that J has a thing for her.

Well, J does have the thing really bad, and in truth, physically, they make a great couple in an advertisement for suntan lotion kind of way. It is the emotional connect, the meeting of minds and hearts across cultures and continents, that is missing. India is missing. Neither J nor any of the  Indian characters look or behave like anyone from the Subcontinent you might know. The look of the film is more important than the content. Hrithik is very handsome with a sombrero on his head. But what about what’s underneath?