Even with no definite plot, this film is a moving meditation on places and what defines them 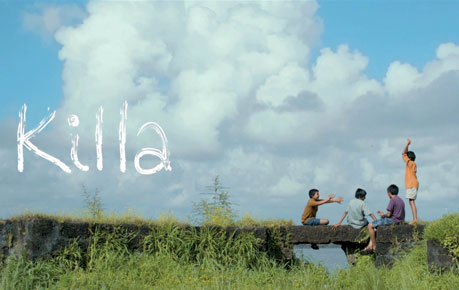 Killa is a movie that draws a direct line between places, people and events. We often wonder whether memories of where we once lived are coloured by the natural environment of that place, or by the consequences of certain unfortunate life events. This is particularly true of our childhood memories, as those are formed at an impressionable age.

With the eye of a landscape artist, director Avinash Arun takes us to the Konkan coast of Maharashtra to tell us about a boy who lived there for some time, while his single mother, a government servant, was briefly posted at the town. Chinmay—Chinnu, as his mother calls him—is a bright student and the only ‘scholarship boy’ in the school. The three boys he makes friends with in his class are not as academically smart as him, but are more street-wise and possessed of remarkable wisdom about life in general. They’re a hugely entertaining bunch, especially a witty kid called Bandya (Parth Bhalerao), and they keep the movie on even keel.

People make places, they say, but Killa tells us that it is the baggage you carry in your head that tinges the memories you have of those places. Life is tough and lonely for Chinmay (Archit Deodhar), and even more so for his mother (Amruta Subhash). But she has to put on a brave front while he is free to behave like a moody pre-teen.

It is in the few scenes that show Chinmay understanding and empathising with his mother’s predicament that the film is most memorable. He figures out that she is no less a displaced person than he is, with the same memories of loss, carrying the same grief at the death of her husband and his father.

There is not much of a plot in Killa, but it is a movie that reveals how the nature of memory is associative. So places might trigger grief, but they don’t cause them.