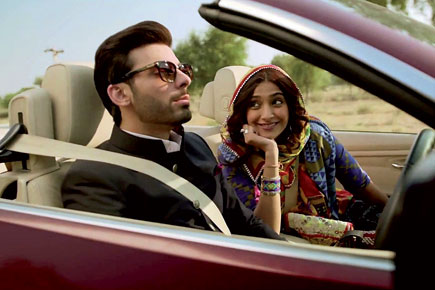 Khoobsurat is set in the palaces of Rajasthan. It is very clear that the middle-class audience of the 1980 Hrishikesh Mukherjee prototype, also called Khoobsurat, has now gone dramatically upmarket and has transformed itself into a target audience for high-end brands.

The costumes, the art direction and the properties are exquisite, and since the intention of the film is to entertain the romantically inclined, it is well cast, with the bimbo side of Sonam Kapoor—as the actress once eloquently described one half of her persona— on full display. She is well matched by Fawad Afzal Khan, who plays the reserved, somewhat uptight heir to a royal Rajput bloodline.

The middle-aged Raja, Shekhar Singh Rathore (Aamir Raza Husain), is in a wheel-chair and dozens of physiotherapists have come and gone, unable to get him to do any exercise. The man has lapsed into depression after he lost his older son in an accident, and he does not want to walk. What he really needs is counselling. The latest physio, Dr Milli Chakravarty (Sonam Kapoor), figures this out—after a disastrous start during which she bumps into priceless antiques, rubs the Rani (Ratna Pathak) up the wrong way, jams with the servants and makes the handsome young prince, Vikram Singh Rathore (Fawad), further arch his arched eyebrow and further starch his superbly tailored achkan.

The whole thing is in the tradition of the paperback romantic novel, and it works in that genus. This is because the director pays attention to the smallest of roles, guards and butlers, and makes them all fit in to the general ambience of old-world elegance. Also, apart from Milli’s mother (Kirron Kher) and her non-stop blather—designed as comic relief—the performances are low key but effective.

Only one sequence, a ridiculous kidnapping episode, is out of sync with the even tenor of the film. Khoobsurat is a pleasant watch.