It is a treatise on corruption that is neither funny nor tragic, nor even moral. 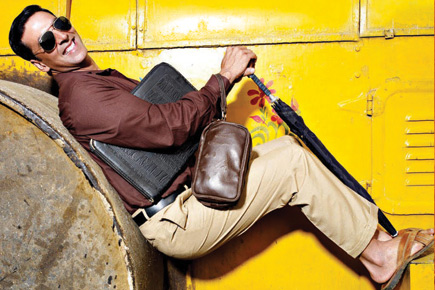 It is a treatise on corruption that is neither funny nor tragic, nor even moral.


Akshay Kumar is a difficult actor to watch at the best of times. He has no interest in the deep recesses of your mind or heart. He simply drills his way to the bottom of your root canal. Understatement is not part of his lexicon, and though in Khatta Meetha his character, Sachin Tichkule, is written as a complex individual—an idealistic activist in college, compromised cynic since then—he simplifies his job by turning himself into a voluble blunderer who babbles about corruption and participates gleefully in it. He plays a contractor with municipal projects, either in hand or in the bush.

Not that the film is dull. A Hindi adaptation of  Priyadarshan’s own octo-syllabic Vellanakalude Naadu, the movie is about municipal corruption in mofussil India and has enough documentation on the subject to create a plausible nest of dusty files, oily finger prints and greasy palms, perched on a termite hill of nasty individuals ready to devour the town’s civic budget. Some of the parasites are from Sachin’s own joint family and his conflicts of interest with them are very stressful, both to him and to his ageing father (Kulbhushan Kharbanda).

Despite being peopled by a motley crew of professional comedians (Rajpal Yadav and Asrani), this movie has murder, serial rape and, arguably, a case for abetment to attempted suicide. In an extraordinary sequence, Sachin lays a trap for his own love interest, the newly appointed and incorruptible municipal commissioner (Trisha Krishnan), and so distraught is she that suicide becomes an option. What sort of ‘common man’ is this devious plotter?

Nearly three hours long, Khatta Meetha is a lengthy treatise on corruption, even for a nation obsessed with endless public discourse on the subject. It is not funny, tragic or moral. It is non-specific in genre and remarkably ambivalent on bribery.