A watch that blares bhajans inside Akshay’s tummy. Book a ticket if you need shock therapy 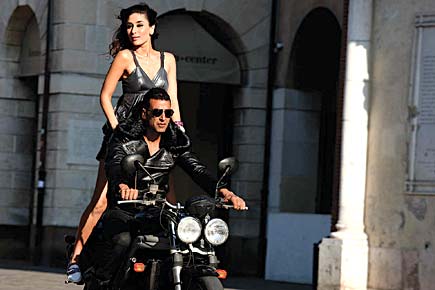 Kambakkht Ishq is about a watch that plays bhajans on the hour, every hour, and drives Akshay Kumar insane.


Kambakkht Ishq is about a watch that plays bhajans on the hour, every hour, and drives Akshay Kumar insane. Dear old Kareena Kapoor, surgeon in an American hospital, has left it inside Akshay. She panics, thinks her medical career is on the line and chases the man in order to open him up and get the watch back. That, ladies and gentlemen, is the plot.

Akshay is a stuntman in Hollywood, pals with the likes of Sylvester Stallone, and horses around LA getting a feel of the city. Literally, with his hands all over every second bikini blonde he leers at. He salivates, talks like a C grade actor with a hangover and seems to do everything possible to turn off a huge section of Hindi film audiences. Which is strange, because in this recession, one would think he need bums on seats.
Kareena’s character is odder still. She’s turned off by this savage, but is dying to get one hand on his insides and the other round his neck.  Having recovered her watch from his tummy, she falls in love with him. What did she see in him? A gall bladder of gold?

Two good actors in the film, Javed Jaffery and Boman Irani, are turned into  extras. Javed is a Sindhi expatriate with bad puns and a terrible accent who wants to sue every professional in LA because apparently, it’s his profession. Boman plays a deaf ENT specialist who misinterprets every patient. The truth is that Akshay Kumar is a bully who makes sure anyone with acting talent is made redundant or simply neutralised.

Director Sabir Khan wouldn’t have a hope in hell of reining in Akshay. As it is, he lets the film drift into a sightseeing tour, all expenses paid, and his idea of tight editing is to get Kareena into one mini shorter than the other. Watch The Grind on the Beach on TV if you want to see hot bods. Less complicated.