A forthcoming film brings together 11 filmmakers of a variety of genres to collaborate on a single narrative. The result could be a panorama of Indian cinema 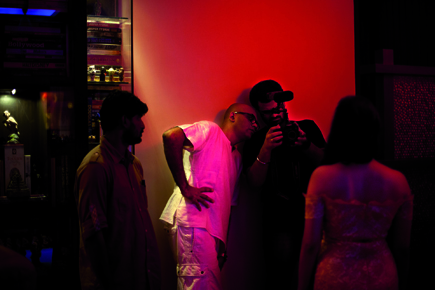 A forthcoming film brings together 11 filmmakers of a variety of genres to collaborate on a single narrative. The result could be a panorama of Indian cinema


When I asked filmmaker and critic Sudhish Kamath if we could meet so I could interview him about the forthcoming movie ‘X’, he was busy interviewing someone else. As I watched the rushes for a part of the movie, I wondered: how could a full-time journalist and film critic for a leading newspaper possibly have the time to write scripts and make movies? And now, he has been instrumental in bringing together 11 directors to collaborate on one movie titled ‘X’ with one script, one storyline, one lead actor (Rajat Kapoor) and eleven actresses.

After about an hour’s wait, when Kamath joined us, his assistant director Javeeth asked: “Sudhish, why this unshaven look?” “What to do?” responded a tired-looking Kamath, “I had no time.” Asked how he manages to multitask so well, Kamath, director of Good Night Good Morning and That Four-Letter Word, casually declares: “Keep yourself away from Twitter and Facebook and you will have plenty of time to do various other things than your work. But yes, I am a movie buff and equally passionate about filmmaking. I make time for ‘X’ after work hours.”

The journey of ‘X’ commenced in mid-March, two weeks before The Goa Project, a unique un-conference for multi-disciplinary creative professionals. Many ideas were pitched and voted on before the event. Kamath proposed this idea on a website: ‘A social experiment: To make a movie in a day through a collaborative effort with many filmmakers, actors and musicians present.’

The idea for ‘X’ became concrete when Sudhish met Shiladitya Bora and Sandeep Mohan (Love, Wrinkle Free) at The Goa Project. They decided to make the movie over a longer period of time instead of rushing to complete it in two days. Sandeep, who was a speaker at The Goa Project, says with excitement, “I couldn’t say ‘no’ to such a unique concept.”

“The protagonist of ‘X’ is a filmmaker,” Kamath says. “I wanted to have different filmmakers’ ideas on how we can do the ‘boy meets girl’ theme. The idea is to capture various genres, flavours and treatments in one movie.”

Most movies involving multiple directors are anthologies—collections of short films, each directed by a different director, loosely connected by a common theme. The history of anthology films in India goes back all the way to the 1939 the Tamil film Sirikkathe. Satyajit Ray did something similar in Teen Kanya in 1961, telling three separate stories. More recently, Bombay Talkies paid homage to 100 years of Indian cinema through four short films by four directors. ‘X’, however, is not an anthology film; its goal is a single cohesive story, told in eleven different genres, demonstrating the possibilities of cinema.

With the novel concept came the challenge of convincing the filmmakers, cast and technical crew. Bora started to work out the finances right away, and in a month’s time, he had managed to convince Nigeria-based presenter Manish Mundra to fund it.

The film will be the directorial debut for well-known film critic Raja Sen. Known for writing modern and intelligent dialogue for 99 and Go Goa Gone, Sen was initially hesitant, but accepted it as a challenge. “When Sudhish called me,” he recalls, “I thought he wanted me to write the script. I was surprised when he asked me to be a part of the directorial team.”

The structure of the film threw up complex challenges of coordination between crewmembers in different parts of the country. Right from the beginning, a private Google group was created to exchange ideas over email, and a WhatsApp group was created for real time communication. Over 300 emails were exchanged among them before they met.

The filmmakers first came together with their respective storylines during an intense 48 hour workshop in Mumbai in May, where they discussed the broader treatment of the movie and its funding. Although they were aware of each other’s earlier movies, many had never met. Not all went smoothly as 11 different filmmakers with their own strengths and ideas tried to come to a consensus.

Suparn Verma (Acid Factory, Ek Khiladi Ek Hasina, Aatma 2) had anticipated these challenges. His motivation for joining the creative crew was, in fact, to face these challenges and think out of the box. “Yes, there were a lot of disagreements,” he confesses. “All our individual segments had to be linked to make it one story. We kept discussing various aspects until all of us were in sync and we spoke the same language.”

The two women filmmakers among them—Rajshree Ojha and Anu Menon—had distinct views to share on relationships. Says Ojha (Chaurahein, Aisha): “Our way of looking at a woman is different. Right from the start, I was sure that my segment would be about a mature relationship between a wife and a husband.” Lead actor Rajat Kapoor gave his inputs as well. “When we narrated our segments, Rajat told us to find an echo in each of [them],” says Kamath. “The biggest challenge,” says Hemant Gaba (Shuttlecock Boys), “was to connect our individual segments and make it one movie. We accomplished it by having common objects, dialogues and scenes connecting the protagonist’s life.”

For Abhinav Shiv Tiwari, whose film Oass is making waves at film festivals, it was a good learning experience. “All of us had faith in each other’s work and merit. Whenever I used to get stuck somewhere, there were ten other brains to help me. I sent my rough draft to Sudhish, and he helped me with scripting.”

Kamath was affectionately called the George Clooney of their ‘Oceans 11’. “That is how they rag me. There were a few outbursts during the workshop, but at the end of the day we brushed away our egos and worked as a team.”

The script went through six revisions. “I sent the final draft, and Q was the first to respond, and gave a go-ahead,” recalls Kamath. “Getting a thumbs up from Q, who has his own reservations about mainstream cinema, was very satisfying.”

Q, or Qaushiq Mukherjee was awarded Best Director at the 2010 South Asian International Film Festival in New York City for his film Gandu—banned in India for its bold subject and graphic content.

With a limited budget, filmmakers had to come up with creative workarounds, such as using car headlights to light a night shot, or using a friend’s apartment for their set instead of a studio. Pratim D Gupta (Paanch Adhyaay), who shot in Kolkata, says he was “just about to begin shooting at Howrah Bridge in the late evening and the bridge’s lights did not show up. We had to wait for a while until the lights came on.”

‘X’ has been shot in London, Chennai, San Francisco, Kolkata, Delhi and Mumbai. Except for Gautham Menon’s, the other ten segments of the movie are ready for post-production. The makers are keen on premiering the film at a reputed film festival abroad. Q is confident the movie will be well received. He strongly feels that Indian audiences have opened up and there is a niche for movies that are experimental in nature. Anu Menon (London Paris New York), feels that India is, in fact, more open to such films. London, she says, is very tough, “a bit inward looking” because it is “a small pool”. She finds India more exciting: “There are all kinds of films being made here and being successful in their own right.”

Kamath feels ‘X’ could encourage more such genre-blending creative collaborations among filmmakers and hopefully bridge the gap between different kinds of cinemas in India. An art house film is clearly not the same as a commercial film. “But our sensibility bias makes us believe that one kind of cinema is better than the other.”

“X represents Indian cinema,” Kamath says. “The movie is done in English, Hindi, Tamil and Bengali. It is a blend of off-beat, arty, masala, regional, commercial and mainstream cinema.” In short: the consummate Indian film.