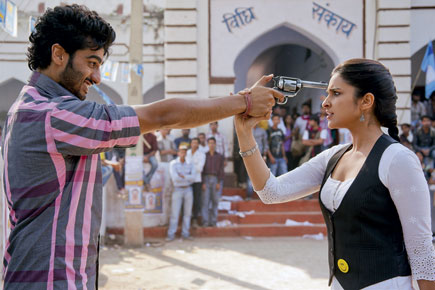 
What Habib Faisal has—both as a writer and director—managed to convey thus far with his cinema is the emotional and moral essence of his dramatis personae. In Ishaqzaade, he works without the moral core that made Do Dooni Chaar, his first film, so memorably earnest. Maybe it has something to do with an anarchic setting that he employs here. In an act of surprise, Faisal constructs an anti-love story, the kind that tells you right away that it has no future.

He introduces the feisty Zoya (enacted by Parineeta Chopra with dazzling appeal), daughter of the Qureshi clan, driving a hard bargain for a gun amid electioneering scenes that recall Mere Apne. At first, she is repulsed by Parma (Arjun Kapoor, who exhibits shades of Abhishek Bachchan from Yuva), the disagreeable Chauhan boy, but then falls for him after a whirlwind romance conducted at decrepit railway yards. Shortly thereafter, they get married, but to her shock, Zoya discovers that this marriage was nothing but a scheme to destroy the Qureshis’ electoral prospects. When she shows up at the Chauhans to kill Parma, his widowed mother offers a rather stupid suggestion—spurned, if she is to make something of her life now, she must stay with Parma and turn him into a man from the animal that he is. What follows is this animal-to-man transformation, which leads them to a brothel where they are provided shelter by a prostitute secretly longing for Parma’s affections.

From the first scene itself, Faisal establishes a tone of aggression, which, for some reason, he abandons subsequently. The characters become soft and tender, acting against their nature. This change of tone is unconvincing, if not an undoing. What’s worse is that the film ends as a pamphlet on interfaith marriages without a context that can lead itself convincingly to it. After all, Zoya and Parma are victims of politics, not religion.