Importance of being Earnest

Who wants to be a hero? Not Deepak Dobriyal. Playing convincing characters, he says, is challenging enough 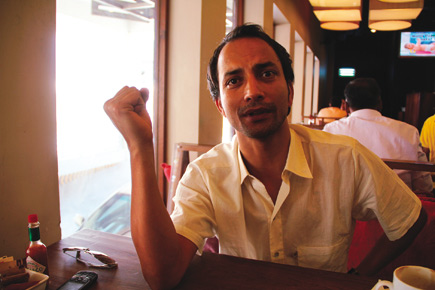 Who wants to be a hero? Not Deepak Dobriyal. Playing convincing characters, he says, is challenging enough


“There are actors and there are stars. During my theatre days, I was always in conflict over who I wanted to be,” says Deepak Dobriyal, 36, better recognised these days as Tanu Weds Manu’s Pappi, the hero’s buddy who wanted to enact his name (‘kiss’ in Punjabi) while introducing himself to a fair maiden in the film. He was a bundle of nerves. He was bold. Above all, he was earnest. It won him whistles in the hall, a career marker of sorts for an upcoming actor. “Now I know I have to walk my own path,” he says, “Whatever I do, whatever I get, I want to do it with utmost sincerity and honesty.” It’s about self-actualisation.

Dobriyal is looking forward to the release of Rakeysh Omprakash Mehra’s Teen Thay Bhai and auteur Jahnu Barua’s Mumbai Cutting, in which he hopes to spring yet more surprises. Cinema, to his mind, is not just about stardom. “Sometimes the art of an ‘actor’ inspires, other times the style of a ‘star’ impresses. Both have their unique responsibilities and are equally needed,” says the man whose role as Rajju of Omkara was another cinematic triumph of believability.

His original passion for acting, he nursed in theatre. It was a brave choice. His parents, with whom he’d moved from the hills of Garhwal to Delhi as a six-year-old,  saw it as something of a cardinal sin to opt for theatre straight after his 12th, leaving higher education to a distance learning programme. But by then, he was clear that “studies are not for me”. After doing a play with a university group for fun, he found himself acquainted with Delhi’s Mandi House art circle, and realised he could turn professional. “For seven years, I did theatre in Delhi, acting in hundreds of plays. No one could see the change in me. Only I could feel and experience it within. That was my real education. I was my own instructor, evaluating myself… and for the first time, realising what one can truly do with oneself.”

It was here that he found true inspiration. Ask him of his favourite actors, and the first name he cites is Vijay Shukla, a theatre performer. “His performances moved me and made me realise what acting is and what I can do with acting.” Other influences include Arvind Gaur and MK Sharma, whose theatre groups he worked with. “Pandit MK Sharma opened my eyes. He’d say ‘Acting is in the tip of your nails, but first understand yourself, change yourself, understand the society you live in, become a good human being, throw off the unnecessary baggage within yourself, and acting will seem like a cakewalk.’”

Before long, he knew he could essay a variety of role with conviction. In cinema too. So he moved to Mumbai. Besides shifting 20-22 homes, he gave close to a thousand auditions during his four ‘struggling’ years in Mumbai, and for just about anything that used a camera: films, serials, ads, music videos… “It was like a goal for all struggling actors to give at least 4-5 auditions daily.” And it wasn’t easy, for at times he’d sit with 300 aspirants auditioning for the same small role in an ad, an audition that would last two days. “Those were the days of preparation. You’d meet people and learn from them. I knew that I had a lot of corrections I needed to do within before I could be anything. So while others worked in the gym on their bodies everyday, I worked on my mindset. And it has paid me rich dividends.”

“The early lessons of acting have helped,” he says, thankful that he never went to any acting school. Head and limb movements do not an actor make, inner transformations do. This also explains his pick of favourite screen actors: Marlon Brando, Irrfan Khan and Pavan Malhotra. And, among actresses, Meryl Streep. “She is so real, she traps and challenges you,” he says, “No matter what role she takes, she becomes that.” It’s exactly what he aimed to do: become the role to the best of his ability and satisfaction. “My job is to be satisfied before the camera, all honesty thrown in. To connect with the audience, you have to throw away the confusion of the man you are.”

The big struggle was with his parents. If throw away anything he must, they felt, it was his passion. “They dreamt of a secure job for me. Till Omkara, they kept asking me to come back to Delhi. They thought only stars could get into films and that actors neither got fame nor money.”

And then Omkara burst into his life, Vishal Bhardwaj’s Othello adaption in which Dobriyal’s Rajju prods Saif Ali Khan’s flawed hero to his and his lover’s tragic fate. The role is remembered for its rural authenticity as much as comic flourishes, not to speak of the searing anguish at the end.

That Dobriyal now has his directors down by their temperament and sensibility speaks volumes for how far he’s come since. “Vishal is discipline and restraint personified, Rakeysh is emotional, Anurag is about detailing and brings a different view of India, Kundan is intense, Bela Negi is a gutsy fighter, Amrit Sagar is full of untiring passion, and Anand Rai is emotional, intelligent and loves everyone equally on the sets,” he blurts out in a quick flurry.

Who he wants to work with next is a woman director. “Woman directors bring a unique honesty and sensibility to cinema,” he says, with Kiran Rao heading his aspiration chart, mesmerised as he is with Dhobi Ghat. Perhaps an unspoken name on this wishlist is his own wife Lara Bhalla, who has worked as assistant director to Vishal Bhardwaj, and on the Owen Wilson and Adrien Brody starrer, The Darjeeling Limited.

He would have to work at it, though, impressing her. “It’s easy to please an audience, but to please someone who knows you in depth? That takes a lot of work.” It makes him nervous, he confesses, to have her hovering about the sets when he has a performance to shoot. This is not because of what he might be up to with someone else, but because of a genuine performance anxiety.

The big lament of this actor, as you would expect, concerns his own performance. Specifically, what he himself derives from it. He has not been able to enjoy himself in front of the camera, he sighs, quite the way he once had on stage back in those days.

But he’s now in cinema, and keen to be tested to his limits. “I haven’t yet got a single role that has required utmost hard work, discipline and research—that challenges the actor and changes the man within. I am no longer looking to be a star, but only to realise myself as an actor to my utmost.”