You will definitely hate syrupy love stories by the time this movie ends. 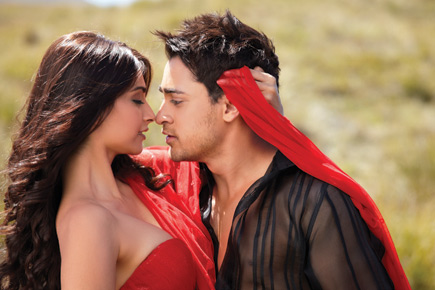 You will definitely hate syrupy love stories by the time this movie ends.


The thing about most of  Karan Johar’s ‘boy meets girl’ productions is that they all have the sub-textual hue of ‘boy meets boy’ stories. The sisters are around, sure, but the conversation always strays to the pretty boys.

The funniest scene in I Hate Luv Storys, and the only one that rings true, involves Jay (Imran) and a narcissistic  movie star (Aamir Ali) who consults Jay about his ‘butt’, because he believes you need a good one to attract the girls.  One day, when this star is surrounded by adoring girls, Jay strolls up, pats him on the behind and says ‘great ass’. The star is delighted at the compliment and preens like a peacock, until he suddenly notices his shocked fans and has to  hurriedly explain: “No, no, it’s not what it looks like.”

Had the film continued in this humorous vein, it would have been good fun, but director Punit Malhotra prefers girls in white dresses with blue satin sashes, and works on paying homage to the successful fluff that Johar has made in the past.

In fact, IHLS—a film about two production assistants, Jay and Simran (Sonam), who fall in love on a movie set—is also about a director who makes a living on the kind of syrupy ‘luv storys’ Jay loves to hate. Director Veer Kapoor (Sameer Soni) is meant as a gentle parody of Johar himself, but ends up as undiluted genuflection to the living legend. The point made is that you might well hate the saccharine content of his movies, but they are hugely successful, so who gives a flying eff.

Indeed, who does? Actually, the real love story in this movie doesn’t work at all. A feline hiss overlaps the ‘romantic’ conversations between Jay and Simran, and they just about keep their claws retracted. Murder is on their minds and will perhaps be on yours by the time the end credits roll.