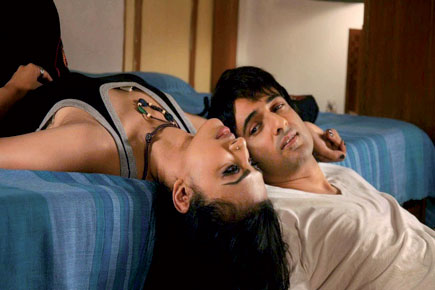 Hunterrr is an explicit movie about ‘the scent of a woman’ and how a certain kind of man can sniff it out. It presents itself as a textbook case of a serial seducer who is self analytical enough to refer to himself as a ‘vasu’, an encounter specialist who goes way beyond ‘ab tak chhappan’.

This is an amusing idea for a movie, but as the film plays itself out, you realise that the protagonist, Mandar Ponkshe (Gulshan Devaiah), far from being a casanova, is actually a stalker. He does not rely on his sex appeal, such as it is, but on devices that include espionage—secretly observing a woman to find out how available he thinks she is, selecting her as a tiger would his prey, then dissembling his way till he can arrange a ‘coincidental’ meeting with her.

All this could well be defined as harassment, but the end result—the eventual enticement of the woman through deception—is presented as the ‘success’ this creepy fellow meets.

On one occasion, while still a student, he eyes a sweet college girl (Veera Saxena) for some time before he jumps into her rickshaw and hitches a ride with her, pretending that he needs to be dropped off urgently a short distance away. On another, he keeps up surveillance on a housewife in his apartment block, until he figures out the cause of her apparent unhappiness. But the ‘hunt’ that really takes the cake is his checking out of a woman at an airport reading Fifty Shades of Grey. Evidently, her literary taste marks her as one of the usual suspects.

Finally, having watched all fifty shades of Mandar Ponkshe, we are mildly entertained but exhausted. Though some of the casting, including that of the lead actor, is good, and though the film depicts the middle-class aspirations, frustrations and sadness of its characters rather convincingly, the film evokes discomfort by portraying stalking as seduction.