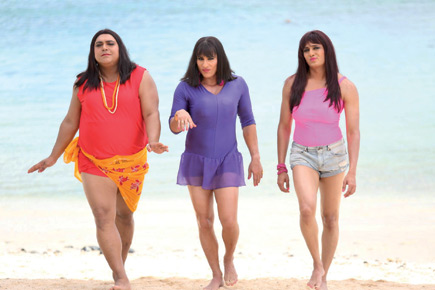 This is actually a structured Sajid Khan film—a rarity for this filmmaker, whose general directorial style is complete disorder. Also, Humshakals is not half as racist and misogynist as his earlier Housefull—part one and two—films. The homo-erotic subtext continues unabated, of course, but the film sticks to a straightforward narrative, and though half-an-hour too long, motors along at an even pace.

Crudity and vulgarity is Khan’s signature tune, and, God knows, he has a huge audience waiting to lap it up. But what is very surprising in this film is the level of enthusiasm that he generates from his central actors, all professionals to the core—Messrs Saif Ali Khan, Riteish Deshmukh and Ram Kapoor. They happily prance around this ridiculous story, each doing a triple role, and, incredibly, seem to be having the time of their lives. You don’t need profound acting skills for this film, so what they contribute instead is a high energy quotient.

It is infectious to see someone like Saif drop his suave persona, and clown around in a self deprecatory manner for almost three hours. He seems to consciously mimic the old British comedy routine—‘Benny Hill’ and ‘Mr Bean’ kind —and play the village idiot.

The film is about Ashok Singhania (Saif), heir to a family fortune but a stand-up comic at heart. He, his friend Kumar (Riteish) and their respective romantic connections (Tamannaah Bhatia and Bipasha Basu) live the fun life in London, until one day the evil ‘Mamaji’ of the Singhania family (Ram Kapoor) slips in a drug that turns Ashok and Kumar into dogs—metaphorically speaking, of course. Their subsequent doggie behaviour gets them locked up in a lunatic asylum.

By the time they get out of the loony bin, you are ready to get into one. The movie is exhaustingly long, but if this kind of inane humour is something you enjoy, you might just get your money’s worth.