If you find this film funny, there is no hope for human beings, let alone reptiles 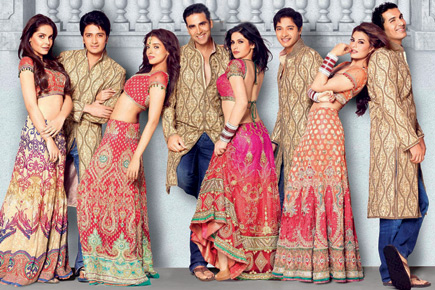 If you find this film funny, there is no hope for human beings, let alone reptiles


There is no accounting for taste. It is entirely possible that several generations of dimwits will be entertained by Housefull 2, as they were by the first edition. What is startling, though, is the number of well known  actors that this bilge has drawn into collaboration. The stars who play patriarchs in this story of greedy and warring  fathers who want millionaire sons-in-law for their bratty daughters include two from the Kapoor khandaan: Rishi and Randhir, cast in their own nicknames, Chintu and Daboo.

With Mithun Chakraborty playing JD, a London tycoon who was once a bandit called Jagga Dakku, and with Akshay Kumar and John Abraham playing Sunny and Max, two con artists posing as rich prospective sons-in-law for the acquisitive Daddy Os, the A list is complete. Such a star cast bestows credibility on a film that treats the medium and its audience so contemptuously that all it does is present foreign locations and a series of TV comedy style gags that seem to go on forever.
If, in the first film, there was a tiger to provide relief from human inanity, here you get double your money—a pet crocodile and python that grab the nether regions of two movie stars, and then, unfortunately, let go. These heroic creatures belong to the daughters of Chintu and Daboo, Henna (Asin Thottumkal) and Bobby (Jacqueline Fernandez). The girls are animal activists who are intent on saving life on earth but end up forgiving our macho men when they boast of owning snake skin belts, leopard skin seat covers and crocodile shoes.

You could watch Housefull 2 from one angle and say, “Well, this is a campy send-up of all those London-based NRI  stories about guys and dolls running after moolah.” But that is not true. Only one scene is interesting, unintentionally: when yesteryear villian Ranjeet is introduced in a cameo as Sunny’s dad. He looks so much more cultured than the rest of the cast.