Mammooty has been at the top of Malayalam cinema for nearly three decades, but says it’s not been easy 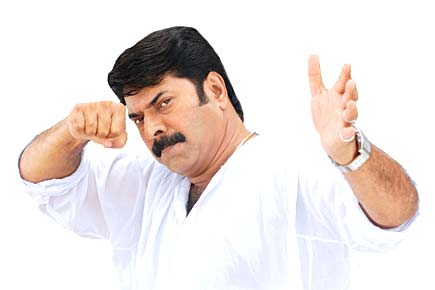 Mammooty has been at the top of Malayalam cinema for nearly three decades, but says it’s not been easy


Q How long will you continue acting?

A As long as I can. I am crazy about cinema. No artiste wants to retire. I want to play the lead role as long as possible, whether as a master, servant, cook or thief.

Q You changed the image of the hero in Malayalam movies…

A I may have influenced the image of the hero, but it was not part of any conscious plan. It just happened. Our society is changing fast. Sathyan and Nazeer satisfied the tastes of viewers of their time. I arrived in another time, when people were demanding something different. It is as per the changing audience’s profiles—situations make the hero. In fact, a different hero concept prevails now. And I am not talking only about Mohan Lal. Artistes like Thilakan and Bharat Gopi have also influenced the image of the hero.

Q Your opinion on Mohan Lal, the rival to your throne in Malayalam cinema?

A I have a cordial relationship with him. He is a great actor. We only have professional competition. In fact, this healthy competition brings the best out of both of us.

Q The secret behind your success?

A Luck. From the very beginning, I got versatile roles. I’ve played so many memorable characters. This track record helps me grow. The credit must go to the makers of these excellent films. Adoor Gopalakrishnan, MT Vasudevan Nair and Padmarajan need special mention. At a personal level, my readiness to work hard may be a reason. I am passionate about my craft, and get very involved in all my projects. There is no dearth of self-confidence. But it is not always easy to be on the top. After all, it is a small industry. Hard work, discipline, patience, sincerity and passion towards work are my success mantras.

Q Why don’t you direct a film?

A I would like to concentrate on acting. Offers to direct films came my way several times, especially when I was associated with a production company. But I’ve decided acting is my forte. There are too many gifted directors around.

Q You have taken both commercial and art cinema in your stride.

A As an artiste, I am not ready to differentiate between art cinema and commercial cinema. I am not ready to degrade any film. The so-called commercial films have made me what I am. That said, my forthcoming film, Pazhassi Raja, is a magnum opus by well-known Malayalam director Hariharan. Jnanpith award-winner MT Vasudevan Nair has written the screenplay. The film revolves around the life and times of Pazhassi Raja, who led guerilla forces against the British in the Wayanad jungles of north Kerala, and was killed at the hands of the enemy. It is a powerful episode from the history of our freedom struggle. Another project is Paleri Maanikkam—Oru Paathira Kolapathaka Kadha (Paleri Maanikkam—The Story of a Midnight Murder). It is based on a novel by Malayalam writer TP Rajeevan and is directed by Ranjith. The story is based on a real-life incident that took place in Kozhikode district of Kerala.

Q Great films happened whenever you associated yourself with MT Vasudevan Nair. Eighteen years have passed since Oru Vadakkan Veeragadha (A Northern Ballad) rewrote the aesthetic sensibilities of Malayalam film viewers. Can we expect a similar experience with Pazhassi Raja?

A Great films happen with the right combination of direction, story, script and acting. I have been fortunate to work with a number of great directors and scriptwriters. The success of collective effort decides how well a film does. Let us hope for the best.

Q Which has been your best role so far?

A There are too many best roles. Each role is close to my heart. It was the role of a police officer in KG George’s investigative thriller Yavanika (Curtain) that cemented my position in Malayalam cinema. There are films like Padmarajan’s Koodevide (Where is the Cage?), MT’s Alkoottathil Thaniye (Alone in the Crowd), Sibi Malayail’s Thaniyavarthanam, K Madhu’s Oru CBI Diary Kurippu, Adoor’s Anantharam (Henceforth), Mathilukal (Walls) and Vidheyan, and TV Chandran’s Ponthanmada. But I like the character
in Vilkanundu Swapnangal (Dreams on Sale) very much because it was my first notable film. In a way, that is my most favourite film. I take full responsibility for my characters, whether they were done well or badly. Good characterisation means being perfect in a lot of things—especially gesticulation, body language, dialect and appearance.

Q How do you rate Malayalam cinema?

A There are a number of good scriptwriters and directors
here. I am happy with their ability to tap my potential. With regard to technology, though, Malayalam cinema lags behind both Bollywood and Kollywood. So the stress here is mainly on content. Even technologically-weak films are successful in Kerala because of the quality of their content. We have people who know how to make top-ranking films. Despite these limitations, Malayalam actors have won no less than 14 national awards for best actor.

Q Has your stature prevented filmmakers from experimenting with you?

A Definitely not. I am open to experiments. Directors like Adoor have experimented with me. It is a small industry. One thing is clear, no major Malayalam actors have stopped filmmakers from experimenting with them. We, in fact, force experiments on us.

Q What is your philosophy on acting?

A I am my most severe critic. After every shoot, I go through severe self-evaluation. Suggestions or criticism from outside may not be well-intended or authentic. There is nobody to correct or guide an artiste. Nobody to help him find the real path. Self-criticism is the most effective way to excel in this career. There is no lapse on my part in identifying weak points and reinventing my skills. It is a continuous process. And this is my philosophy. I have only one real challenge: how to communicate and convey.

Q You were recently criticised for your statements on certain political issues, especially the Gujarat carnage

A One thing I wish to clarify. The artiste in me has never taken any stand at any time. As a concerned citizen, I had made some comments on certain social issues. They were not aimed at hurting anybody. I do not endorse any political philosophy.

Q Have you done any films in other languages recently?

A A Tamil film—actually, it is bilingual—Aruvudai released recently. The Malayalam version is titled Vande Mataram. I am keen on acting in more Tamil and Telugu films. There is no new offer in Hindi though. The way I speak Hindi may be a problem. But I am hopeful.

Q How do you view Slumdog Millionaire?

A I have nothing against using poverty as the subject of a film. But there were far better films dealing with Indian poverty. Take Ray’s Pather Panchali and Mira Nair’s Salaam Bombay, for instance.

Q You look exactly the same even after two and a half decades of acting.

A I work hard to look after myself, and to protect my health. I avoid junk food and carbohydrates. I spend about 20 to 30 minutes every day at my personal gym. I also restrict food intake.