Changing the personality of a lead character midway, this film crashes after a delightful start 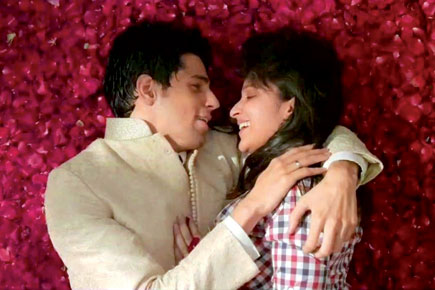 Changing the personality of a lead character midway, this film crashes after a delightful start

The Achilles’ heel of Hindi movie writing brings Hasee Toh Phasee crashing down from a delightful start. You can fiddle with the story, but you can’t change the behaviour and personality of the lead character midway through the film just to conform to the expectations of a romantic comedy.

Till one hour into the film, Meeta (Parineeti Chopra) has facial tics indicating serious psychological problems. Though she is a supersmart science graduate doing a PhD at a University in China and an inventor to boot, she has been rejected by her family and is on anti-depressants. She makes decidedly anti-social faces at people and does the Dustin Hoffman Rain Man routine of an autistic person who lacks social engagement but has an instant, almost computerised recall of information.

Nikhil (Sidharth Malhotra) then turns up—a good looking business entrepreneur perpetually on the verge of a major deal that somehow never comes through. Nikhil is engaged to Karishma (Adah Sharma), Meeta’s elder sister, and is given charge of hiding the embarrassing younger sister and black sheep of the family. But in the process of shielding Meeta, he turns protective of her. Love blossoms.

Hey presto, Meeta’s behaviour alters dramatically. Almost instantly, she abandons all her tics, all her social awkwardness, and becomes an endearing friend and soulmate to Nikhil. Hasee Toh Phasee turns into an unbelievable fairy tale.There is no further mention of Meeta’s psychiatric problems in the rest of the film.

A script writer cannot change human behaviour, let alone personality, and be taken seriously. An actress playing an autistic character one moment and a smart, cute, marriageable girl the next should have some conflict about her role that she voices to the writer and director. Especially in a film co-produced by Anurag Kashyap and Vikramaditya Motwane, votaries of some realism in cinema.