A film about a father, daughter and a moneylender, set in stark Ladakh. It’s also a fine homage to Andrei Tarkovsky 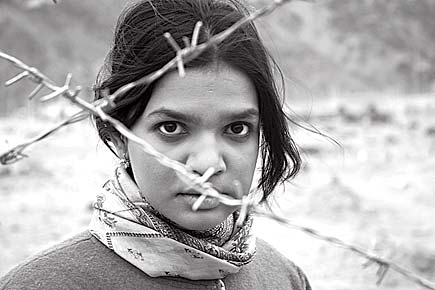 A film about a father, daughter and a moneylender, set in stark Ladakh. It’s also a fine homage to Andrei Tarkovsky


There are two ways to look at Shivajee Chandrabhushan’s Frozen. One is as a starkly simple story of a family in the beautiful landscape of Ladakh. The other is as an astonishingly precise homage to a very famous Russian director who frequently uses landscapes in the snow.

From the perspective of a Ladakhi story of the struggle for survival of a family of three—father Karma, daughter Lasya and son Chomo—Frozen is a slow, plodding and exquisitely shot film (cinematographer, Shanker Raman). The father is a man trapped by his environment. He makes apricot jam, working from a home that he has lived in all his life. That home is now in the way of the strategic manoeuvring of the Indian military and they want to relocate him.

On Karma’s other flank is a moneylender to whom he owes a great deal of money, more than he will ever earn from apricot jam, and the lender is eyeing his house and his pretty daughter. Karma (Danny Denzongpa) is in a no-win situation and derives mental peace from his Buddhist upbringing—‘the enemy is not outside, but within us’. The home he may lose, he knows, is ‘attachment’ and the Lord Buddha always spoke of ‘detachment’.

But life is brutal in frozen Ladakh and has to be lived one cold day to the next. Chandrabhushan shot Frozen by carefully placing nature (human nature included) in the context of the larger framework of the universe, signified by God’s own landscape in Ladakh. He keeps this world in black-and-white, except for the last shot in his film.

And this last shot, of course, brings us to Andrei Tarkovsky’s famous last scene in Andrei Rublev (1966)—a black-and-white film with a final scene in colour. For its various similarities, Frozen isn’t just a homage to Andrei Rublev. The reservation one has about the film is a hope that it is indeed a homage to Tarkovsky and not just a rip off. It would be very sad if it were so.