Fireflies in the Garden

Julia Roberts lights up this hollow film about hollow people. But even that million-watt smile isn’t enough 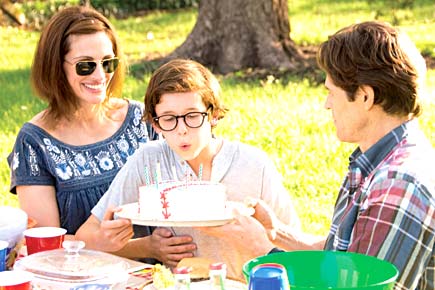 Julia Roberts lights up this hollow film about hollow people. But even that million-watt smile can’t compensate for the lack of substance


Here come real stars to fill the upper skies,/And here on earth come emulating flies,/That though they never equal stars in size,/(And they were never really stars at heart)/Achieve at times a very star-like start./ Only, of course, they can’t sustain the part.

A little stilted in construction, and perhaps not one of Robert Frost’s best works, the poem is at the heart of Dennis Lee’s film. The principle of the movie is that ‘child is the father of man’, as another poet from another century suggested.

The protagonist, Michael Taylor (Ryan Reynolds), is a novelist. Director Lee cuts in time from when he was a little boy, treated roughly by his father (Willem Dafoe), to the present when he comes home to see his mother (Julia Roberts). Needless to say, his mother is the most beautiful woman in the movie.

There is an accident and Michael is forced to come to terms with his unhappy past. As a child, he once claimed he had written an original poem and read out the Frost poem, Fireflies in the Garden, to an audience comprising his professor father and friends. That embarrasses his dad no end. From the adult Michael’s conversation and his attempts at wit in the film, he seems to have retained that streak of plagiarism in his literary avatar.

Fireflies… is a movie about death and how people will never die so long as the living retain them in their memories. To achieve this profound sense of spiritual realisation, director Lee stuffs his movie to the gills with flashbacks, all of them cinematically connected with clever cutting. Little Michael being punished in a garage versus big Michael having sex with his alcoholic wife, little Michael defending his mother versus big Michael accosting his mother’s secret lover. All this cross-cutting is fine in a student film, where you expect an excess of style and a shortage of content. But in a mainstream Hollywood movie, the narrative style, however crafted, has to have substance to back it up. Fireflies… lacks this patently. It is a hollow film about hollow men, leaning together, headpieces stuffed with straw.