With its truthful depiction of individual foibles and local Goan charm, this film is a winner 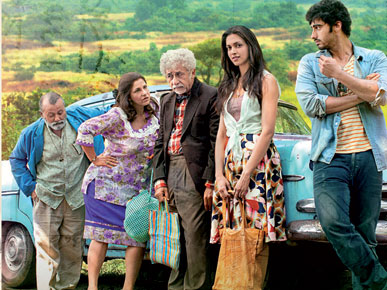 With its truthful depiction of individual foibles and local Goan charm, this film is a winner

If you live in a place long enough doing virtually nothing—‘sosegado’ as they call it in Goa—it doesn’t mean you are calm and stress free. The mind wanders, the imagination plays tricks and there is plenty of time to regret, turn bitter or eccentric. Finding Fanny is about five characters like this in a small village in Goa called Pocolim. Only one, Don Pedro (Pankaj Kapur), stakes claim to professional success. He is an internationally known painter, or so we are told, but from the only work we see of his—a portrait that he does of his magnificent obsession, Rosalina Eucharistica (Dimple Kapadia)—he is no FN Souza. His palette, painting and persona recall someone from a ‘Retrogressive Artist’s Group’.

The story is about Ferdie (Naseeruddin Shah) looking for his long lost love, Fanny. He is accompanied by Pedro, Rosalina and two young people with memories and regrets of their own—Angie (Deepika Padukone) and Savio (Arjun Kapoor). The five of them drive around Goa in a beat-up old car, and nothing significant or unexpected happens right through the movie.

As in RK Narayan’s fictional town of ‘Malgudi’, individual quirks in the characters’ speech and behaviour reflect the larger tradition and culture outside their immediate world. Writer Kersi Khambatta and director Homi Adajania have skillfully imbued the local syntax in words and pictures. So whether the conversations are in English, Konkani or Hindi, the pattern of speech and intonation remains unique to Goa. The art direction and photography present the micro-picture of a society, ignoring the touristy Goa in favour of the interior of heritage homes, dirt roads in villages and the faces of interesting people. Cinematographer Anil Mehta’s close- ups are extraordinary portraits of humans in doubt, despair or happiness.

All the actors in this movie will treasure forever this portfolio of themselves at a particular time and place.

Do not miss Finding Fanny.