Unlike a typical Salman Khan movie, this has got a plot, a well-behaved hero, and even a script. 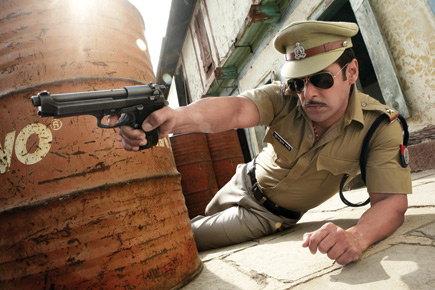 Unlike a typical Salman Khan movie, this has got a plot, a well-behaved hero, and even a script.


For a Salman Khan movie, Dabangg has too much plot. Set in the police-politician-gangster nexus of Uttar Pradesh, the film is carefully laid-out. This is not a good idea.

Salman, being Salman, needs zero script and plenty of ‘situations’ to prop up his offbeat and unpredictable screen persona. Not for him the boring school of method acting. ‘Behavioural acting’ is more up his street, and the best movies he has made have been ‘Salman Unlimited’ vehicles, where you see the man at his eccentric, iconoclastic, misanthropic and tasteless best.

Instead, what you have in Dabangg is a relatively well-behaved police officer called Chulbul Pandey. Yes, he does act up with his step-father (Vinod Khanna) and half-brother (Arbaaz Khan), and is somewhat ambivalent in his attitude to crime and punishment.

However, he helps the poor, is wary of politicians, and even though he takes a cut from a  hold-up at the Bank of Uttar Pradesh, he beats the robbers up first. Basically, Salman is not such a bad boy in this film and this turns out to be not such a good idea.

What also strikes you is the absence of misogyny in the Chulbul character. Ordinarily, a Salman film would have him treat women as accessories to his machismo, at best as creatures to be humoured, and girls would swoon over this. But not the girl here.

Rajo (Sonakshi Sinha) is a potter and seems to have a mind of her own.  In an amazing scene, sitting serenely amidst her pottery, Chulbul praises her as a professional and says that not only is she a kumhar (a potter), she is also a kalakar (an artist).

Has this actor strayed on to the wrong movie set? Salman Khan aficionados will be disappointed. When the constabulary at the police station come up with better one-liners than their commanding officer, you know Salman has been straitjacketed.