A staid affair. There is no real conflict in this film. You half expect the villain to come up and ask Salman for an autograph 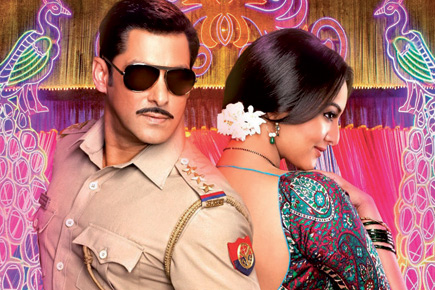 A staid affair. There is no real conflict in this film. You half expect the villain to come up and ask Salman for an autograph


Since Dabangg2 is more of an entertainment product than a film, it takes care to package Salman Khan with love and affection. Chulbul Pandey’s police station is in Kanpur this time and his constables are the same scaredy-cat sycophants and comedians and his superior officer is the president of his fan club. The wife loves him to death, the dad and brother are respectful, the media fawns on him and you half expect the villain- in-chief to come up and ask him for an autograph.

So it’s a tame sequel. But it has all the constants, and, at the end of the day, you have to ask a question. After almost 25 years of being a movie star without the slightest interest in being an actor, does Salman have a better understanding of his strengths and weaknesses than do all other delusionary prima donnas in the business? It would seem so. He works on trademarks, not acting skills, and frequently uses what adfolks call a ‘mnemonic’— an amusing and entertaining device to help memory retention and associative thinking.

The dark glasses that he clips on to the back of his collar in both the Dabangg films is one such ‘mnemonic’. This is partly how you identify Chulbul, and if, in the first film, it signified ‘cool’, in this sequel, since he is now a married man who flirts with his wife, it is ‘sexy’. In a lovely scene in Dabangg 2, just before leaving home, his wife (Sonakshi Sinha) stops him and tells him that he has forgotten something. She then turns around to show him his shades, attractively clipped to the back of her blouse. He turns around too, and back to back, they do the transfer. Naughty, but nice.

The problem with the movie is that it has no real conflict. Chulbul’s family is too cute, the bad guys are pussycats and even the final ‘mnemonic’, shirt off, doesn’t quite work.