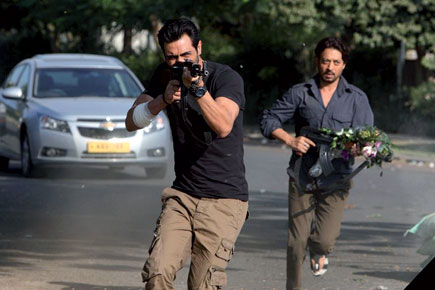 
That will be the day. This film is wish fulfillment for jingoists, all about our own Zero Dark Thirty. With two interesting differences. The mission to get Iqbal Khan, code named ‘Goldman’ (Dawood Ibrahim by inference) wants him ‘alive’, and the operation is not officially approved, though the dithering PM is apparently aware of it. The buck stops with a gung-ho R&AW chief (Nassar). He has an agent in Karachi called Wali Khan (Irrfan), complete with a local identity and wife and child.

Just before ‘D-Day’, three other Indian agents join Wali Khan and the mission is underway. The movie has non-stop action with little time for you to take a breather and consider the operational and political plausibility of it all. With Goldman under constant watch and protection of the ISI, the Indian agents seem a trifle short on firepower. Besides, the actual political ramifications of an attempt to kidnap a Dawood-like character would be so huge it would spill out into political theatre, something that the film is clearly not equipped to handle.

So the makers deny the audience any ‘thinking time’ and pace their film like a Subcontinental Mission: Impossible, with rapid-fire action, but in settings that look like ‘home’— mohallas and dilapidated buildings in little gullies with insane traffic and with everyone dressed in flashy ‘made-in-Pakistan’ designer clothes, the flashiest, naturally, being Goldman himself (Rishi Kapoor).

Goldman also has the best lines in the film, with several contemptuous references to the pusillanimity of the Indian State, particularly this State’s insistence on proper judicial procedure in the trial of Ajmal Kasab, a line that received the loudest jeer of agreement from an audience in Pune.

The problem with D-Day is that it compromises credibility by understating the ‘enemy’. The Indian agents are all sharp-shooters and by the end of the film, the ISI can’t even shoot straight, missing sitting ducks at 20 paces.