His entry into Andhra politics may have been iffy, but his presence on the Net is something else 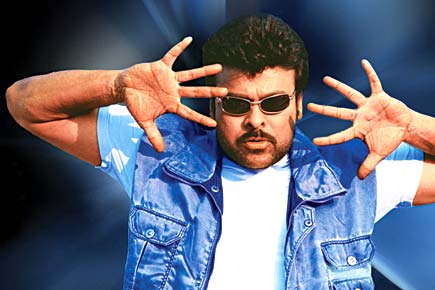 His entry into Andhra politics may have been iffy, but his presence on the Net is something


His entry into Andhra politics may have been iffy, but his ability to confound remains. A YouTube clip of Telugu superstar Chiranjeevi from two of his old films has nearly totted up 10,000 views at last count. Indeed, his presence on the Net is something.

A popular quiz on Facebook called ‘Which South Indian superstar are you?’ profiles him like this: ‘You are the brainiest of the lot. You defy Newton’s third law which says where there is an action there is an equal and opposite reaction, but when you punch or kick, there is no reaction. Theory of evolution is bullshit. The earth is a list of creatures which you have allowed to live. When Mona Lisa was smiling, she was actually thinking of you. Hurricane Katrina was actually the result of your morning jog and the tsunami was the result of your swim in the Pacific and the Italian earthquake was the result of your skipping.’ If any evidence of those rare qualities was needed, click on the link youtube.com/watch?v=8F_b-yNA8P0.

The first video has a clearly 35-plus looking Chiru playing college-level basketball. Early on in the clip, he jumps over an opposition player. He dribbles with the basketball in the motion of a dance move and pats the ball as if patting a poodle. Later, he delivers a slam dunk for the ages. At another moment, the basketball spins on his index finger, Sudarshan chakra style, as if he were Lord Vishnu. But, like a true hero, the man is fighting a foot injury and is tripped over by an opposition player and is taken out. As his team inches closer to defeat, he disregards pain, comes back to court, catches the ball and throws it one-handed into the basket from a distance which is more Arabia than Andhra! And, that’s not enough.

The now-late Michael Jackson, too, could have done with a dash of Chiru ‘dishoom’. Another clip, again on YouTube, has Chiru as a vampire in red dress (all green-eyed and gnashing teeth) wooing a bosomy woman in yellow. Check him out bringing his right shoulder to his right jaw. The Telugu lookalike of Michael Jackson’s Thriller is another laugh-out-loud. Click: youtube.com/watch?v=ursHXBzddp8. On the basis of both clips, two things are clear. Kobe Bryant, Michael Jordan and the NBA should shift to Banjara Hills. And Michael Jackson needs to be buried in Kakinada.