This film has all the elements of the Bhatt success formula, but in the wrong proportion 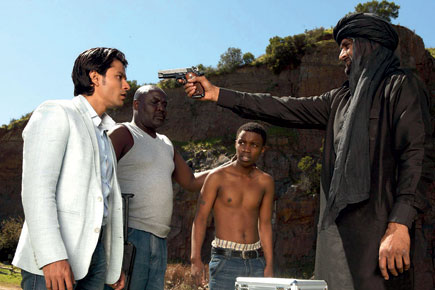 This film has all the elements of the Bhatt success formula, but in the wrong proportion


The good thing about films from the Bhatt stable—Mukesh and Mahesh—is that they are never stupid. Almost always, they are about money and sex, the struggle to achieve them and then the foolishness of  trying to convert them into happiness. The characters often make good with lucre and lust but are left empty inside. The audience, meanwhile, has a great time watching the beautiful people  and raunchy scenes. Their failure to find happiness becomes irrelevant, since we get to see the good lookers, the bankruptcy of their souls, and their exciting road to sin.

It’s an equation that usually works. But in Blood Money, the ingredients are not in the right proportion. The movie starts off with a telling of the Hansel & Gretel fairytale, a metaphor for the plot and, perhaps, the Bhatt entertainment formula. When Kunal (Kunal Khemu) and his wife Arzoo (Amrita Puri) arrive in Cape Town from Mumbai and are led to their beautiful new home, Arzoo likens it to the gingerbread-and-cake house in the Grimm story. There may be a witch inside.

There is a witch, but in the office. He is Kunal’s employer, a diamond buyer and seller who is not very particular about the source of his million dollar rocks. It is South Africa, after all, and a large number are ‘blood diamonds’—some from Angola, where they murder people and trade them for arms. The witch, Mr Zaveri (Manish Choudhary), is a charming and sinister boss, and teaches Kunal the ropes of the business, such as they are, until it finally dawns on the young man that he is now a prisoner of this blood-soaked trade.

Khemu is an agreeable actor and gives the role a good shot, but there just isn’t enough content in the movie. Blood Money is watchable, but falters in the mix—too much talk,  action that is too little and too late, and, despite the delectable Mia Udeya in a bikini, not enough erotica.