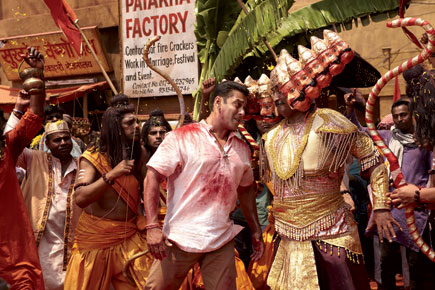 Sometimes, Hindi cinema does manage to function as a separate and parallel narrative to the mainstream ethos of a country. It has this ability to dilute fundamentalism when religion and political thought come together in that old incendiary mix.

With the composite culture of India as a platform for its art—and of course entertainment—Bajrangi Bhaijaan reaches out to the audience with the human aspect of a tense relationship between two countries.

A little Pakistani girl gets left behind in India when she gets off the Samjhauta Express before the train crosses the border to her homeland. Lost in this vast country, she boards a freight train to Kurukshetra. There she spots Pawan Kumar Chaturvedi (Salman Khan), a Brahmin and a Hanuman bhakht, popularly known as ‘Bajrangi’ in the neighbourhood because of the passion of his faith.

The opening lines of the Bhagavad Gita speak of Kurukshetra: ‘Dharma- ksetre, Kuru-ksetre samaveta yuyutsavah…’ (Oh Sanjaya, what did my sons, desirous of battle, and the sons of Pandu do after assembling in the holy land of righteousness, Kurukshetra?) And it is this story of taking the path of righteousness that the film follows from the moment Pawan meets little Shahida (Harshaali Malhotra).

His mission is to take her home, and when he finds out that she is a Muslim and from Pakistan, he becomes even more determined to follow the essence of the dharma of which he is possessed. So, though he crosses the border illegally with Shahida, he gives himself up to soldiers at the Pakistan border because, as he insists, he will not deviate from that path.

It is an extraordinarily eloquent film, melodramatic at times, but quite lyrical and replete with symbols of integrity in both religions. During their trials on the road to Pakistan-occupied Kashmir, during which they are ably assisted by a TV reporter called Chand Nawab (Nawazuddin Siddiqui), they meet a maulvi (Om Puri) who shields them because he says that a mosque is both a place of worship and refuge for the faithful.

Again, in an interesting combination of music, the background score has a Western flavour with Julius Packiam’s compositions, while the songs are in Hindustani, including a wonderful qawaali originally composed by the Sabri Brothers of Pakistan—Bhar Doh Jholi Meri Ya Muhammad.

What all this does is offer a sense of the Subcontinent’s composite culture, against the background of which the usual notions of nationalism and patriotism begin to pale. Pawan, a simple soul, is full of this belief, and so are a lot of the people he meets in India and Pakistan. ‘Jai Bajrang bali’ is what Pawan greets everyone with, including the maulvi.

The amused Chand Nawab wants to know: will Lord Hanuman’s grace work in Pakistan? It seems to, at least going by the sincerity with which it is expressed through Pawan. Salman Khan is not a great actor, but in this film he has submitted himself to the vision of the director instead of focusing on his own brand image as an action hero as he usually does.

In all, this is an extraordinarily moving film by Kabir Khan, who seems influenced by the visual design of Imtiaz Ali’s Highway, a film in which the director used the landscape to express the commonality of the human experience. In this movie too, Kabir Khan uses mountains to speak of peace.